Rep. Chris Collins, shown here at the Republican National Convention at Quicken Loans Arena in Cleveland, Ohio, in 2016, has announced he will not seek re-election this fall. File Photo by Pat Benic/UPI | License Photo

Although Collins pledged to "fight the meritless charges," the congressman said in a statement he would suspend his re-election campaign because he believed doing so would be "in the best interests of the constituents of" his district.

"[Democrats] would like nothing more than to elect an 'Impeach Trump' Democrat in this District, which is something that neither our country or my party can afford," Collins said. He pleaded not guilty Wednesday in federal court to 13 counts of securities fraud, wire fraud and false statements.

The charges relate to Collins' past role as a board member of Australian biotech company Innate Immunotherapeutics. Last fall, a congressional probe determined there was "a substantial reason to believe" Collins promoted the company's stock using insider information -- a violation of federal law. It made a similar determination about Collins' 2013 request to staff at the National Institutes of Health to meet with Innate Immunotherapeautics about clinical trial designs.

An indictment alleges Collins told his son, also charged, about a trial failure for a drug meant to treat multiple sclerosis. The son, Cameron Collins, then traded on that information and alerted someone else who made a trade, the indictment says. Collins, his son and the third individual, Stephen Zarsky, avoided $768,000 in losses, according to the indictment.

Collins has defended his innocence.

"I believe I acted properly and within the law at all times," Collins said. "Throughout my tenure in Congress, I have followed all rules and ethical guidelines.

U.S. News // 7 hours ago
Bobcat fire in L.A. County intensifies; Northwest firefighters go into isolation
Sept. 19 (UPI) -- A new wildfire broke out in California Friday and had burned 91,000 acres of land and some firefighters went into isolation this weekend after being exposed to COVID-19 amid record-breaking fires that have burned up.

U.S. News // 10 hours ago
Protesters return to Portland streets after pausing due to smoke
Sept. 19 (UPI) -- Demonstrators returned to downtown Portland Friday to call for police reforms after taking a hiatus of more than a week due to unhealthy air quality. 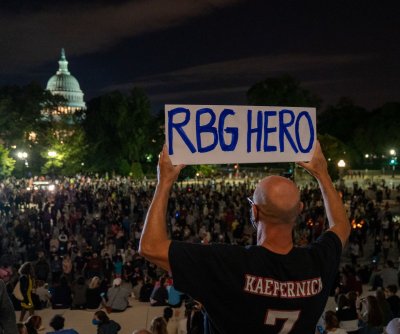