Police block off a street after a rally for then-presidential candidate Donald Trump in San Jose, Calif. on June 2, 2016. On Friday, a panel of federal judges said the San Jose Police Department put Trump supporters in danger by exposing them to 'violent protesters.' File Photo by Terry Schmitt/UPI | License Photo

July 29 (UPI) -- Federal judges in California on Friday said a lawsuit against the City of San Jose that accuses its police of putting supporters of President Donald Trump in danger may go forward.

The lawsuit, filed by vocal Trump supporter Juan Hernandez, accuses the San Jose Police Department of of negligence during a 2016 Trump rally in the city. Hernandez said police led a group of Trump supporters through a crowd of Trump protesters who allegedly attacked them while the police stood by and didn't intervene.

"It was really scary because the cops aren't doing anything, they were just watching everything happen," Hernandez told KGO-TV. "They started coming to us and they attacked us, we weren't inciting anything, we weren't saying anything to them."

The 9th Circuit Court of Appeals ruled 3-0 to reject the City of San Jose's motion to dismiss the case and that officers did not qualify for immunity from the lawsuit and may be challenged in court.

The judges wrote that by "shepherding them into a crowd of violent protesters," the "officers acted with deliberate indifference to the danger."

"San Jose Police were largely indifferent to us because we were Trump supporters. They had ample time to figure out the plans and contingencies," he said.

U.S. News // 2 hours ago
Growing Gulf Coast system expected to become tropical storm Friday
June 18 (UPI) -- A tropical storm warning spanning from Intracoastal City, La., to the Florida Panhandle's Okaloosa/Walton County line is in effect, as a disturbance in the Gulf of Mexico is expected to strengthen over the weekend. 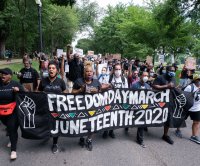 U.S. News // 7 hours ago
3 dead, 2 missing after tubers go over N.C. dam
June 18 (UPI) -- Authorities in North Carolina said search and rescue crews scouring the Dan River for a group of tubers who went over a dam retrieved three bodies while two other people were still missing.