The top U.S. diplomat testified Wednesday before the Senate Committee on Foreign Relations, which questioned the Trump administration's commitment to national security priorities in light of the summit.

Senators questioned Pompeo about the substance of that meeting, which was private and involved only the two leaders and translators.

"All of us who are policy makers who deserve to know so that we can fashion policy accordingly," Sen. Robert Menendez, D-N.J., said.

Menendez questioned whether Trump and Putin discussed sanctions the United States implemented after Russia annexed the region following fighting with Ukraine. Pompeo skirted the question, citing the sensitive nature of the information not suitable to share in public.

Pompeo announced a new memo from the Trump administration -- the Crimea Declaration -- that denounces Russia's actions on the Crimean peninsula.

The committee also questioned Pompeo on Trump's meeting with the North Korean leader Kim Jong Un in Singapore earlier this summer. The summit resulted in a joint statement from both leaders underlining the desire for a denuclearized Korean peninsula.

Sen. Edward Markey, D-Mass., said he worried the current administration was being "taken for a ride" by Kim in denuclearization talks.

Pompeo said he believes both administrations shared the same understanding of the summit. The secretary did not expand further.

"I came here to talk about American foreign policy today," Pompeo said. "I'm trying to stay out of the political circus."

U.S. News // 4 hours ago
Rare fall nor'easter, 'miserable' weather to mark final week of October
Many in the northeastern United States have rarely had to bring out rain coats and jackets due to the lack of chilly temperatures and relatively dry conditions so far this October, but a change is in the works. 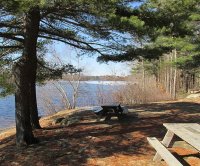