"The [Department of Justice] has continued to hide information from Congress and repeatedly obstructed oversight -- even defying multiple congressional subpoenas," he wrote. "We have had enough."

Meadows and Jordan issued a statement saying "evidence continues to mount regarding the Department of Justice's problematic decision-making during the 2016 campaign and conduct surrounding the transition to President [Donald] Trump's administration in 2017."

"The failures cited within the articles include intentionally withholding embarrassing documents and information, knowingly hiding material investigative information from Congress, various abuses of the [Foreign Intelligence Surveillance Act] process, and failure to comply with Congressional subpoenas, among others," they said.

The Republicans also alleged Rosenstein is a witness who could be called into an investigation into potential abuse because he signed off on an FBI surveillance renewal application to wiretap former Trump campaign adviser Carter Page and therefore has a conflict of interest in the Mueller investigation, The Hill reported.

"As such, his conduct in authorizing the FISA surveillance at issue in the joint congressional investigation makes him a fact witness central to the ongoing investigation of potential FISA abuse," the articles of impeachment stated. "Deputy Attorney General Rosenstein's failure to recuse himself in light of this inherent conflict of interest and failure to recommend the appointment of a second Special Counsel constitute dereliction of duty. Wherefore, Rod Rosenstein, by such conduct, warrants impeachment and trial, and removal from office."

In the statement Meadows said lawmakers' complaints had been ignored for too long and it was time to remove Rosenstein from the position of deputy attorney general. 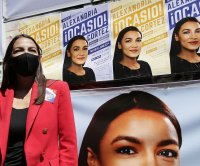 U.S. News // 6 hours ago
Pending home sales dip slightly in October, easing off on hot pace
Nov. 30 (UPI) -- Pending sales in the U.S. housing market declined slightly for a second consecutive month in October, signaling buyers may be reaching a limit on what they can afford, updated data showed Monday.