A CVS logo is seen on a building in Washington on September 1, 2011. On Friday, the company apologized after a pharmacist at one of its Arizona locations refused to fill a transgender woman's hormone therapy prescription. File Photo by Roger L. Wollenberg/UPI | License Photo

July 22 (UPI) -- CVS has apologized after a pharmacist at one of its Arizona locations refused to fulfill a hormone therapy prescription for a transgender woman.

The company released a statement one day after after Hilde Hall wrote a blog about her experience on the American Civil Liberties Union website on Thursday.

"CVS extends its sincere apologies to Ms. Hall for her experience at our pharmacy in Fountain Hills, Arizona last spring," CVS said Friday on Twitter. "The conduct of the pharmacist, who is no longer employed by CVS, violated company policies and does not reflect our values or our commitment to inclusion, nondiscrimination and the delivery of outstanding patient care."

In her ACLU blog, Hill said she went to the Fountain Hills, Ariz. CVS in April to get her first prescription for hormone therapy.

"I was finally going to start seeing my body reflect my gender identity and the woman I've always known myself to be," Hill wrote.

"Embarrassed and distressed, I nearly started crying in the middle of the store," Hill said. "I didn't want to answer why I had been prescribed this hormone therapy combination by my doctor. I felt like the pharmacist was trying to out me as transgender in front of strangers. I just froze and worked on holding back the tears."

After Hill's doctor called the CVS to explain the prescription, the pharmacist still refused, Hill said. She was eventually able to get her prescription filled at a local Walgreen's.

This month, Hill filed a complaint against CVS with the with the Arizona State Board of Pharmacy and asked for a public apology.

In that apology, CVS acknowledged that Hill attempted to contact the company about the incident but was ignored. The company blamed that on an "unintentional oversight."

U.S. News // 36 minutes ago
Another 5 jurors seated in Kim Potter trial for death of Daunte Wright
Dec. 1 (UPI) -- Another five jurors were seated Wednesday in the manslaughter trial of a former Minnesota police officer who fatally shot Daunte Wright during a traffic stop earlier this year.

U.S. News // 41 minutes ago
Stacey Abrams announces bid for Georgia governor in 2022
Dec. 1 (UPI) -- Stacey Abrams announced Wednesday that she will run for governor of Georgia in 2022 following successful organizing efforts for Democrats in the state after her 2018 loss to Gov. Brian Kemp. 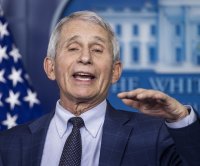