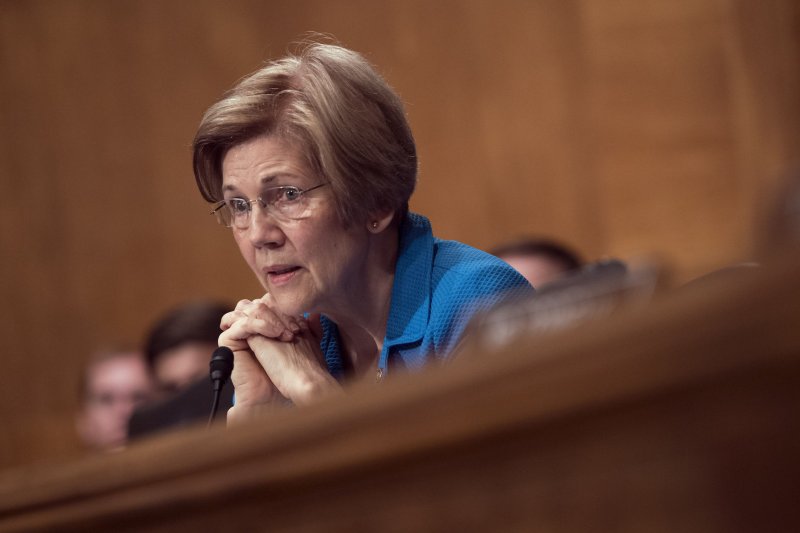 Kathy Kraninger was appearing before the Senate Banking Committee for confirmation hearings Thursday.

"You were part of it, Ms. Kraninger," Warren said of the immigration crackdown. "It is a moral stain that will follow you for the rest of your life."

Kraninger is associate director for general government programs at the Office of Management and Budget, where she oversees the budget for seven departments, including the Department of Justice and Department of Homeland Security.

Democrats and Republicans on the committee repeatedly asked what role Kraninger played in the development and implementation of the Trump administration's policy.

"I had no role in setting the zero-tolerance policy," Kraninger said. When pressed for specifics, she said it "wasn't appropriate to get into the particular details" of her advice, but she acknowledged participating in meetings about the policy.

Warren said Kraninger's answers were "lawyerly" and expressed frustration with her carefully worded responses to questions.

After the hearing, Warren told reporters that Republicans who criticized the Trump administration's "zero tolerance" policy should be willing to vote against Kraninger's confirmation.

Kraninger was nominated by Trump in June to replace CFPB acting Director Mick Mulvaney. He has been criticized by Democrats who believe he catered to the demands of businesses, including payday lenders and for-profit education companies. He is also Kraninger's boss as director of the OMB.

Since the CFPB was formed in 2011 as part of the response to the 2008 financial crisis, to protect consumers against bad practices by banks and other financial institutions, many Republicans have pointed to it as an example of unnecessary regulation and criticized its lack of accountability.

RELATED Ethics watchdog: Mulvaney may have 'misled' Senate at confirmation

North Carolina Sen. Thom Tillis, a Republican, said he wants to "defang" the agency and would support the confirmation of Kraninger.

Some committee members questioned whether Kraninger had enough experience in consumer financial protection to lead the agency since she has not worked in the banking industry. Sen. Heidi Heitkamp, D-North Dakota, criticized her background and said the job requires a combination of "competency and empathy."

Democrats had requested postponing the hearing until they received requested documents related to Kraninger's involvement in the "zero-tolerance" policy and the administration's response to Hurricane Maria in Puerto Rico. Committee Chairman Sen. Mike Crapo of Idaho said he was unaware of the committee ever delaying a hearing for such a reason.

U.S. News // 1 hour ago
Mississippi judge rejects clinic's appeal, allows total abortion ban to take effect
July 6 (UPI) -- A Mississippi court has rejected a bid from the state's last abortion clinic to prevent a trigger law from taking effect, handing women rights a defeat and forcing the health center to shut down by the end of Wednesday.

U.S. News // 10 hours ago
U.S. sues Arizona over proof of citizenship voting law
July 5 (UPI) -- The Department of Justice filed a lawsuit against Arizona over a new state law that would require residents to provide proof of U.S. citizenship to vote in federal elections.

U.S. News // 10 hours ago
Uvalde, Texas, victims aren't getting compensated from state fund as intended, officials say
July 5 (UPI) -- State Sen. Roland Gutierrez and Uvalde Mayor Don McLaughlin said families of the Uvalde shooting victims are experiencing delays in getting compensation from the state and that the compensation has been insufficient.

U.S. News // 18 hours ago
Illinois attack was one of several deadly shootings across U.S. over July 4th holiday
July 5 (UPI) -- Deadly gun violence marred July 4th celebrations in a number of cities across the U.S. over the weekend, highlighting what political leaders say is the ongoing result of insufficient regulations at the national level.