Trump arrives in Belgium ahead of NATO summit, visits with May, Putin

By
Susan McFarland and Daniel Uria 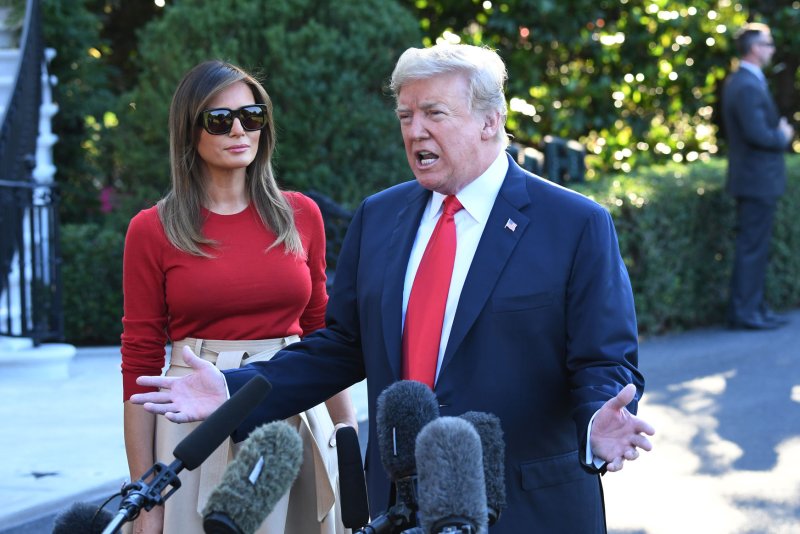 President Donald Trump talks to reporters Tuesday prior to departing for Britain for the NATO summit. Photo by Pat Benic/UPI | License Photo

President Donald Trump salutes as he and first lady Melania Trump board Marine One on the South Lawn Tuesday prior to departing for Britain from the White House. Photo by Pat Benic/UPI | License Photo

The president and first lady landed in Brussels Tuesday night where he will attend the NATO summit Wednesday and Thursday before leaving the country for meetings with British Prime Minister Theresa May and Russia's Vladimir Putin.

They shook hands with greeters who awaited them, before making their way to the residence where they will stay.

After the summit, Trump will head to London for a state dinner with May.

Before leaving Tuesday, Trump told reporters about this week's meetings, which he called interesting and said "all countries will be happy" with.

"I have NATO. I have the U.K., which is in somewhat turmoil. And I have Putin. Frankly, Putin may be the easiest of them all," Trump added. "Who would think?"

Trump also said the European Union is taking advantage of the United States.

"We spend 75 percent on NATO and frankly, it helps them more than it helps us," he said.

Trump and May will hold bilateral talks before he meets Queen Elizabeth II, who has met every U.S. president since 1952 except Lyndon Johnson.

Trump leaves Britain for the summit with Putin on July 16 in Helsinki, Finland.

Asked by reporters if he considers Putin a friend or foe, Trump answered, "competitor."