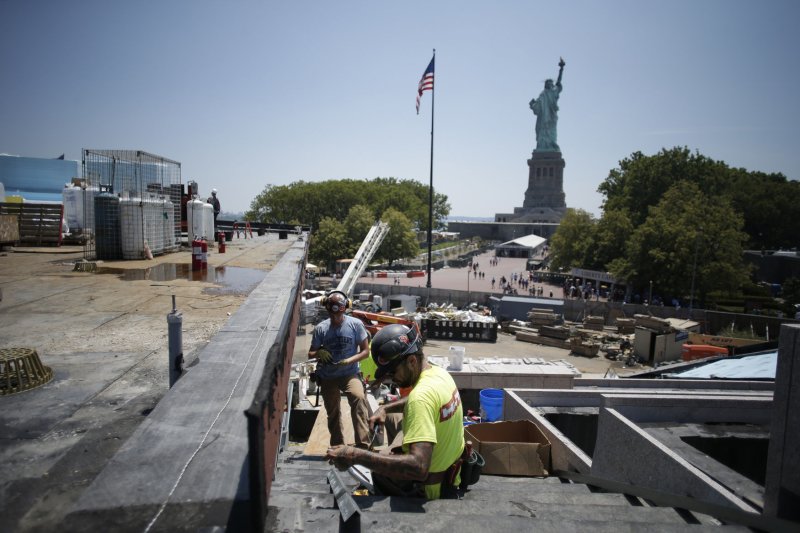 The Statue of Liberty Ellis Island Foundation launched a crowdfunding seeking at least $50,000 toward the completion of the new Statue of Liberty Museum on Liberty Island, which is currently under construction. Photo by John Angelillo/UPI | License Photo

The foundation launched the "For Lady Liberty" campaign on crowdfunding website Indiegogo, seeking at least $50,000 toward funding the 26,000-square-foot museum planned to open in May 2019.

Designed by U.S. architecture firm FXCollaborative, the new museum is meant to hold more guests than the existing exhibit inside the pedestal of the Statue of Liberty.

Tickets to the museum, which will become the new home of the Statue of Liberty's original torch, will be included in the price of ferry tickets purchased for Ellis Island and Liberty Island.

The foundation is offering donors a variety of perks including a tour of the museum alongside the designers, tickets to the opening gala and ribbon cutting ceremony and apparel including hats, T-shirts and watches, depending on the amount of the donation.

Donors will also have their names displayed in a digital registry, known as the Founders Star, inside the museum.

The foundation noted Joseph Pulitzer led a crowdfunding campaign to complete the statue's pedestal in 1884 in which 120,000 people donated more than $100,000.

Donors were also encouraged to contribute donations of $18.86 in honor of the year the Statue of Liberty was dedicated.

U.S. News // 1 hour ago
Sen. Ron Johnson subpoenas FBI over its Russia probe
Aug. 11 (UPI) -- Republican Sen. Ron Johnson has subpoenaed the Federal Bureau of Investigation to hand over records concerning its probe of Russia meddling in the 2016 presidential election.

U.S. News // 16 hours ago
Major gas explosion destroys 3 homes in Baltimore; at least 1 dead, 7 injured
Aug. 10 (UPI) -- At least one person was killed and seven others were injured in Baltimore on Monday by a natural gas explosion that destroyed three homes, authorities said.

U.S. News // 9 hours ago
California judge orders Uber, Lyft to reclassify drivers as employees
Aug. 10 (UPI) -- A judge in California sided with the state's attorney general, ruling that Uber and Lyft must reclassify their drivers in the state as employees.

U.S. News // 12 hours ago
Facebook announces new financial team for online payments
Aug. 10 (UPI) -- Facebook unveiled Monday a new leadership team for its online payment service ahead of a broad roll out in the United States.

U.S. News // 12 hours ago
U.S. deficit "more than tripled" because of coronavirus rescue spending, report says
Aug. 10 (UPI) -- The federal budget deficit tripled in the first 10 months of fiscal year 2020, up to $2.8 trillion compared with $0.9 trillion during the same period last year, the U.S. Congressional Budget Office said in a report.