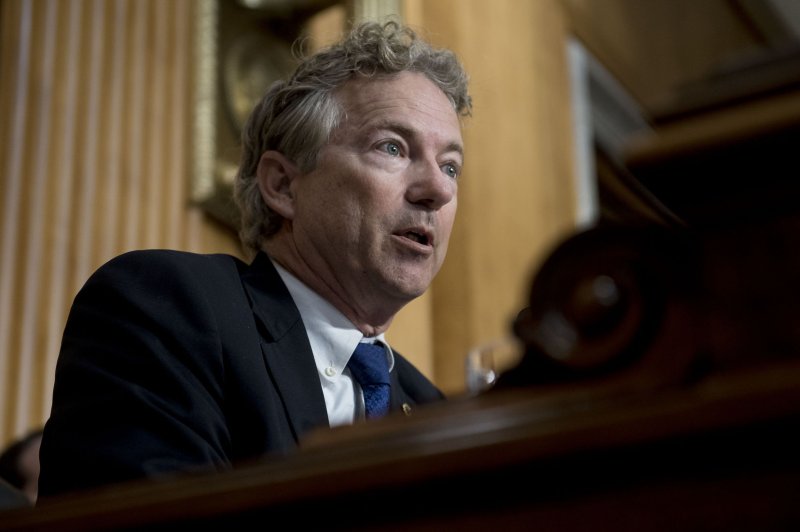 July 2 (UPI) -- Rand Paul thanked U.S. Capitol police Monday for arresting a man he said threatened to kill the senator and his family.

"Thank you to the U.S. Capitol Police for their arrest of the man who recently threatened to kill my family and me," tweeted Paul, a Kentucky Republican.

The man is accused of threatening to use an ax to slay the family, USA Today reported.

"It's just horrendous that we have to deal with things like this," Paul said.

The senator filed a civil lawsuit last month against Rene Boucher, a neighbor who attacked him in his front yard last year.

Boucher pleaded guilty to one felony count of assaulting a member of Congress resulting in personal injury in March for tackling Paul as he was mowing his lawn in November. Paul seeks damages for "physical pain and mental suffering" from the attack, in which he suffered five broken ribs and bruised lungs.

Paul was at a baseball field in Alexandria, Va., last year when James Hodgkinson opened fire on Republican members of Congress practicing for a charity baseball game against a Democratic team.

House Majority Whip Steve Scalise, R-Louisana, was shot in the hip with a rifle, and two members of Capitol Hill police, a congressional staffer and lobbyist were also injured.

Hodgkinson was shot by police and later died from his wounds.

Paul was not injured in that attack.

U.S. News // 1 hour ago
Navy discharges 45 sailors over refusing COVID-19 vaccine
Jan. 27 (UPI) -- The U.S. Navy said it has discharged 45 service members who refused to be inoculated against the COVID-19 pandemic.

U.S. News // 3 hours ago
U.S. warns of heightened businesses risks in Myanmar
Jan. 26 (UPI) -- Ahead of the one-year anniversary of the military seizing control of Myanmar in a coup, the Biden administration is warning Americans about the heightened-risk of doing in business in Asian nation.

U.S. News // 6 hours ago
Bomb cyclone set to blitz Boston with blizzard conditions
A still-developing winter storm is set to become a major nor'easter that will bombard New England with heavy snow and blizzard conditions this weekend.

U.S. News // 7 hours ago
Suspect in killing of Houston constable deputy arrested in Mexico
Jan. 26 (UPI) -- Police on Wednesday arrested Oscar Rosales, 51, after he was suspected of shooting and killing Harris County Cpl. Charles Galloway, 47, during a traffic stop over the weekend.

U.S. News // 7 hours ago
Supreme Court denies stay day before Oklahoma execution
Jan. 26 (UPI) -- The U.S. Supreme Court on Wednesday denied a stay of execution for an Oklahoma death row prisoner scheduled to be executed less than a day later.