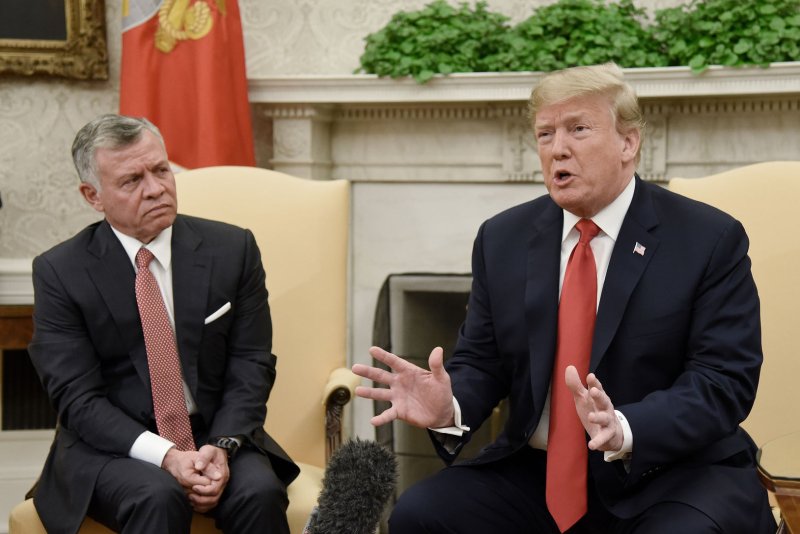 President Donald Trump, joined by first lady Melania Trump (L) and King Abdullah II, second right, and Queen Rania of Jordan (R), delivers remarks to the media as they walk to the Oval Office for a meeting at the White House on Monday. Photo by Olivier Douliery/UPI | License Photo

June 25 (UPI) -- President Donald Trump will welcome the king of Jordan to the White House on Monday before he heads for South Carolina to stump for a Republican who faces a runoff challenge this week.

King Abdullah II and Queen Rania are scheduled to arrive at the White House mid-Monday afternoon, when they will be greeted by the president. The king will then hold a bilateral meeting with Trump.

The meeting is expected to be an attempt to influence the United States' Middle East peace plan, which could be presented within weeks.

Abdullah has urged the Trump administration to endorse a two-state solution, which includes a sovereign Palestinian state as part the deal. Trump has not yet endorsed the idea, but has said previously he supports a two-state solution if both sides want it.

After Abdullah's visit, Trump will travel late in the afternoon to South Carolina to rally for Gov. Henry McMaster, who faces businessman John Warren in a gubernatorial runoff vote Tuesday.

McMaster received 53,000 more votes than Warren in the five-person June 12 GOP primary, but Warren has surged in polls in recent weeks.

Last week, Warren said Trump "would not be coming here if it wasn't close."

Trump has attended multiple rallies in recent weeks to aid Republican candidates ahead of the fall's key midterm elections. Saturday, he stumped for Sen Dean Heller in Las Vegas. Wednesday, he spoke at a rally in Minnesota.

McMaster is seeking his first full term as governor. He was the state's lieutenant governor under former Gov. Nikki Haley, and ascended to the post when she left to become U.S. ambassador to the United Nations in Trump's administration.

Warren has attempted to tie McMaster to two scandals -- the collapse of a $9 billion nuclear power project, and the indictment of GOP political consultant Richard Quinn in a corruption probe.

U.S. News // 25 minutes ago
Capitol police arrest Va. man with fake ID, gun as officials brace for inauguration
Jan. 16 (UPI) -- Capitol police is Washington, D.C., said they arrested a Virginia man who tried to enter a restricted area and was found to have fake credentials and a loaded high-capacity magazine gun.