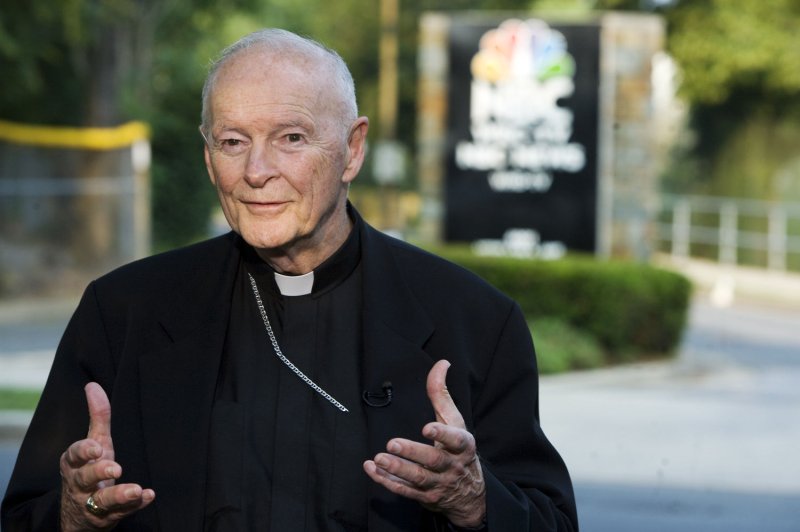 Cardinal Theodore McCarrick, retired Archbishop of Washington, announced he was stepping down from the ministry Wednesday amid allegations of sexual abuse. File photo by Patrick D. McDermott/UPI | License Photo

June 20 (UPI) -- Retired Catholic Cardinal Theodore McCarrick, the former archbishop of Newark, N.J., and Washington, D.C., announced he was stepping down from the ministry Wednesday amid allegations of sexual abuse.

In a statement, the Archdiocese of New York said the Vatican secretary of state, at the direction of Pope Francis, asked McCarrick to step down from the ministry.

The allegations against McCarrick stem from the abuse of a teenager nearly 50 years ago, while the former archbishop was a priest of the Archdiocese of New York.

"This archdiocese, while saddened and shocked, asks prayers for all involved, and renews its apology to all victims abused by priests," the archdiocese said.

Although McCarrick said he has "no recollection" of the case and was "shocked" by the report, he accepted the pope's request to no longer publicly exercise his priestly ministry.

"While shocked by the report, and while maintaining my innocence," McCarrick said in a statement Wednesday, "my sadness was deepened when I was informed that the allegations had been determined credible and substantiated.

"I am sorry for the pain the person who brought the charges has gone through, as well as for the scandal such charges cause our people."

Cardinal Timothy Dolan, who told McCarrick about the abuse allegations months ago, said the crisis in the Catholic Church has been "devastating."

"We must put first the serious nature of this matter with respect and support for the process aimed at hearing victims and finding truth," Dolan said in a statement.

U.S. News // 16 hours ago
As many as 99 missing, 1 killed in Miami-area condo collapse
June 24 (UPI) -- At least one person was killed and as many as 99 were missing Thursday after about half of the units in high-rise oceanfront condominium building near Miami Beach collapsed overnight.

U.S. News // 14 hours ago
Teamsters vote to make helping Amazon workers unionize a priority
June 24 (UPI) -- The International Brotherhood of Teamsters voted Thursday in favor of a plan to support unionization efforts for Amazon warehouse workers and drivers in the United States.

U.S. News // 8 hours ago
CDC extends national COVID-19 eviction ban for one more month
June 24 (UPI) -- The Centers for Disease Control and Prevention on Thursday extended a national moratorium barring landlords from evicting renters through the end of July, and said it's the last time it will renew the controversial ban.
Advertisement