The march on the Immigration Customs and Enforcement Processing Center, where migrants are held until their court hearings, followed weekend protests at the Tornillo-Guadalupe Port of Entry about 20 miles southeast of El Paso.

"This is the second-largest community mobilization in just a few days, which speaks volumes about how absurd are the policies of President Trump of incarcerating children," said Fernando Garcia, executive director of the Border Network for Human Rights, which organized the protest along with other advocacy groups. "The community isn't only saddened but very angry. This is the straw that broke the camel's back."

El Paso's outrage has echoed around the country and on Capitol Hill, where President Donald Trump met with lawmakers late Tuesday on the issue.

The temporary tent shelter opened Friday in nearby Tornillo, Texas, to handle an influx of migrant children. As U.S. Attorney General Jeff Sessions prioritizes illegal entry cases for prosecution, children are being separated from their parents, who are being charged at the border.

That has generated a new problem: The exhaustion of the government's capacity to hold the children, who are handed over to Office of Refugee Resettlement under the U.S. Department of Health and Human Services.

HHS said last week it had received nearly 2,000 children who were separated from their parents between April 19 and May 31, putting its usual facilities near capacity. The Tornillo tent encampment is holding about 200 teenagers with a capacity of 360, Garcia said.

It could be expanded to house as many as 4,000 children, U.S. Rep. Will Hurd, R-Texas, told the El Paso Times.

Department of Homeland Security spokesman Kenneth Wolfe said the tents will be air-conditioned, as desert temperatures climb toward 100 degrees.

Garcia said the Trump administration is using the children as leverage to get funding from Congress to fulfill his campaign promise of building a wall along the Mexico border.

Las Americas Immigrant Advocacy Center director Linda Rivas said Tuesday's demonstration let the parents who are separated from their children know that they are not alone.

"Remember that there are mothers and fathers in this facility in anguish because their children have been stolen from them and don't even know where they are," she said.

U.S. News // 36 minutes ago
Zalmay Khalilzad resigns as U.S. envoy for Afghanistan
Oct. 18 (UPI) -- Ambassador Zalmay Khalilzad has resigned from his post as the United States lead diplomat to Afghanistan following the late summer exodus of the U.S. military from the war-torn country. 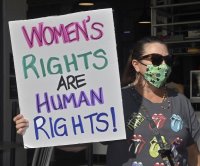