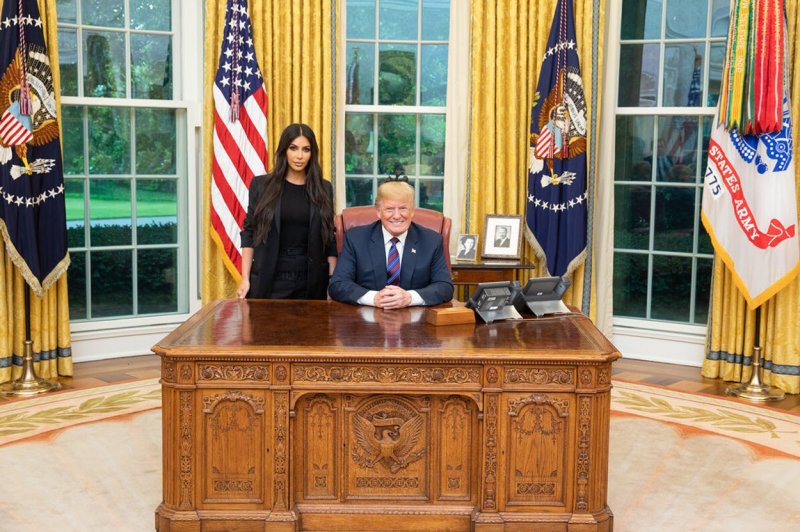 President Donald Trump meets with reality TV star Kim Kardashian in the Oval Office of the White House on May 30. Thursday, the reality star said she plans to advocate for clemency for non-violent drug offenders similar to Alice Johnson. File Photo courtesy of the White House | License Photo

In an interview with NBC's Today, Kardashian met Johnson for the first time since she was released after serving 21 years for non-violent drug and money laundering charges.

Johnson, who was sentenced to life in prison in 1997, said she didn't even know who Kardashian was until the TV star took up her case.

"I started getting every magazine I could find," Johnson said. "Everyone was amazed, and I was amazed too."

RELATED Rudy Giuliani: Trump 'probably' has power to pardon himself

Johnson said during the 1990s, she thought hers were only minor crimes. Before she got involved in illegal activity, she said she'd lost her job, went through a divorce, filed for bankruptcy and dealt with the death of her son.

"It's a darkness of the soul. It's something unimaginable," she said. "I'm not trying to excuse myself. I know that many people experience tragedy and don't get involved in illegal activities."

In the interview, Kardashian said she'd discussed Johnson's case with her attorneys for seven months before the 63-year-old grandmother was freed. She said it was a process that took longer than expected.

"I called Ivanka [Trump], and we had a really great conversation about women and wanting to help each other," Kardashian said, adding the White House adviser was very "receptive."

Last month, Kardashian met personally with the president in the Oval Office to discuss prison reform -- and plead Johnson's case.

"The president had compassion for her right away," Kardashian said. "To me, this has nothing to do with politics. This has to do with people."

Kardashian said she now plans to advocate for others in Johnson's former situation, and has already forwarded several other cases to the White House for review.

"Since I feel so fulfilled, why would I stop that?"

Trump has indicated he will grant clemency to others. He pardoned former boxing champion Jack Johnson and said he's mulling one for Muhammad Ali. Former Illinois Gov. Rod Blagojevic and professional homemaker Martha Stewart are others he's mentioned for possible clemency.