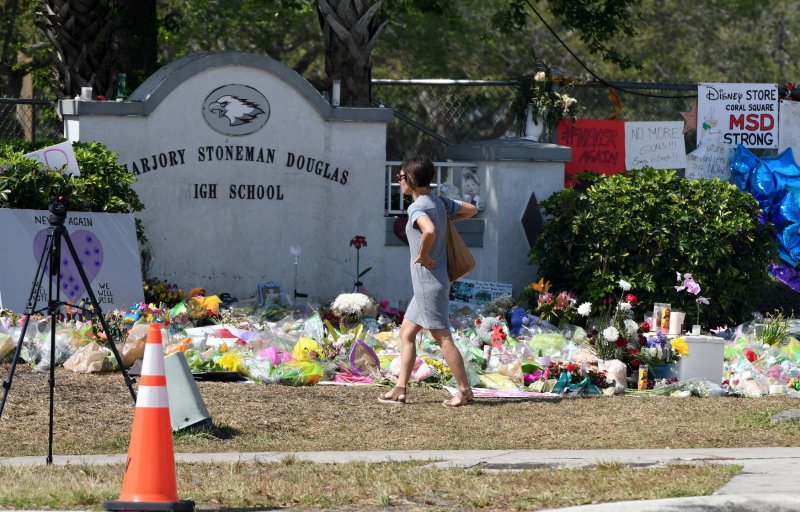 June 3 (UPI) -- The 2018 senior class of Marjory Stoneman Douglas High School graduated Sunday, nearly four months after more than a dozen of their classmates were killed at school.

Seniors Nicholas Dworet, Joaquin Oliver, Meadow Pollack and Carmen Schentrup were among the 17 students and faculty members killed by former student Nikolas Cruz in the Feb. 14 shooting and received posthumous diplomas in the solemn ceremony at the BB&T Center in Sunrise, Fla.

Students wore a sash that read, "MSD Strong" and Stoneman Douglas principal Ty Thompson told the graduates to reflect on the memory of their classmates and their efforts to bring about change since the shooting.

"Remember those not with us, and celebrate all the successes the Class of 2018 has brought to the community and the world!" Thompson said.

Pollack's brother, Hunter Pollack, walked across the stage to receive her diploma and shared a memorial to his sister on Twitter.

"Today, Is the day my sister has been waiting for. Graduation where she would've been getting her diploma and be on her way to attend college. This is a sad day, as I will be walking stage to get her diploma for her," he wrote.

Oliver's mother, Patricia Oliver, walked across the stage wearing a yellow T-shirt that read, "This should be my son," as she accepted a diploma on is behalf, WPLG reported.

Schentrup's mother, April Schentrup, said it was too painful for her to attend the ceremony, but shared a photo of her daughter in her cap and gown and wished her classmates well.

"I am proud of Carmen's friends and classmates on their accomplishments. They've overcome so much. I know they will cont to make positive changes," she wrote.

Tonight Show host Jimmy Fallon addressed the graduates as a surprise commencement speaker and brought levity to the proceedings, while also sharing admiration for the students.

"My wife and I brought our two little girls because we wanted them to see what hope and light looks like," Fallon said.

Fallon also commended the students on their resiliency and activist work in the wake of the shooting.

"You took something horrific -- instead of letting it stop you, you started a movement," he said. "The whole world has heard your voice and that was you making a choice ... That was you choosing hope over fear."

Congratulations Marjory Stoneman Douglas Class of 2018! You are not just the future - you are the present. Keep changing the world. Keep making us proud. #MSDStrong #YouAreThePresent pic.twitter.com/czvZwezKSt

Following the ceremony students including Emma Gonzalez and Cameron Kasky teased an announcement on Monday and Kasky shared a photo with the phrase "800 marches were just the beginning."

The graduation came after survivors of another mass shooting at Santa Fe High School in Texas held their graduation ceremony on Friday.

The 328 seniors walked across the stage on the two-week anniversary of the shooting that killed 10 people.

"The events of May 18 have left a mark on this class, but you are strong and you are determined," said principal Rachel Blundell.

U.S. News // 6 hours ago
More than two-thirds of shoppers struggling to pay for groceries
Dec. 7 (UPI) -- Grocery bills are too expensive for the average American and customers are changing their shopping habits, according to a survey released Wednesday.