Trump's warning to Canada: Fair NAFTA deal, or no deal at all 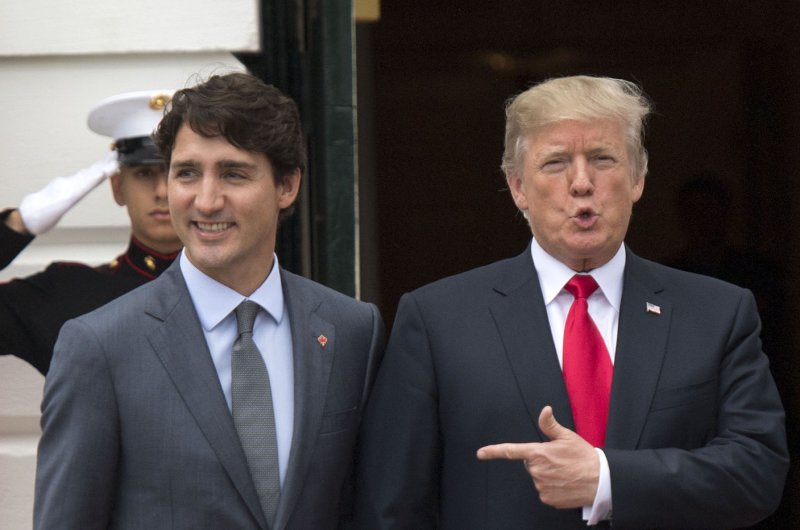 President Donald Trump warned Canadian Prime Minister Justin Trudeau Thursday his administration will only accept a fair deal on NAFTA, or nothing at all. File Photo by Kevin Dietsch/UPI | License Photo

June 1 (UPI) -- President Donald Trump has told Canadian Prime Minister Justin Trudeau the United States will only accept a fair deal on the North American Free Trade Agreement -- or no deal at all.

"The United States has been taken advantage of for many decades on trade. Those days are over," Trump said late Thursday.

"This message was conveyed to Prime Minister Justin Trudeau of Canada: The United States will agree to a fair deal, or there will be no deal at all."

On Friday, Trump demanded Canada "open their markets and take down their trade barriers."

"Canada has treated our Agricultural business and Farmers very poorly for a very long period of time," the president said in a tweet. "Highly restrictive on Trade!"

Earlier Thursday, Trudeau announced retaliatory tariffs in response to U.S. duties on steel and aluminum made in Canada, Mexico and European Union nations.

RELATED Trump: 'Not backing down' on steel, aluminum tariffs

"American tariffs on Canadian aluminum and steel are unacceptable," Trudeau said in a statement. "We will always stand up for our workers."

Trudeau also canceled plans to visit Washington to finalize a new NAFTA deal after Vice President Mike Pence demanded that any deal would last just five years. The Canadian leader told Trump in a phone call he would not sign an agreement with such a "sunset clause."

"Americans remain our partners, friends, and allies," Trudeau said. "This is not about the American people. We have to believe that at some point their common sense will prevail. But we see no sign of that in this action today by the U.S. administration."

Trump has repeatedly threatened to junk the 1994 trade agreement unless it's renegotiated to fix what he says are terms unfavorable to the United States.

U.S. News // 1 hour ago
Salt Lake City Police suspends K9 Unit after dog attacks kneeling Black man
Aug. 13 (UPI) -- The Salt Lake City Police Department has suspended its K9 unit a day after bodycam footage was published showing an officer ordering his police dog to attack a Black man keeling on the ground with his hands in the air.

U.S. News // 6 hours ago
Prosecutors request to revoke bail for man who posed as CIA agent
Aug. 12 (UPI) -- Prosecutors have requested that bail be revoked for a man who pleaded guilty to posing as a CIA agent, alleging he has since continued a similar scheme.