May 18 (UPI) -- Video from a New Jersey Department of Transportation camera shows the driver of a school bus made a U-turn on the highway before it hit a dump truck in a crash that killed two people.

Three school buses were taking middle school students to a field trip Thursday when the crash occurred on Highway 80 in northern New Jersey. The video shows one bus missed an exit and the driver navigated across the lanes of traffic to make a U-turn in an area designated for emergency vehicles, WNBC-TV reported.

A teacher and fifth-grade student died in the crash, officials said. Several others, including the driver, were hurt.

The crash tore off the bus' front end and undercarriage, and closed traffic across all lanes.

The bus carried 38 students and seven adults from East Brook Middle School in Paramus, N.J. They were on their way to Waterloo Village, a recreated 19th-century town about 40 miles west of the school, when it crashed.

The teacher was identified as Jennifer Williamson, 51, a social studies teacher who'd taught for more than 20 years.

Officials have not yet released the name of the student or bus driver.

NJ.com reported federal transportation records show the company that owned the dump truck, Mendez Trucking, has received hundreds of safety violations and has been involved in eight crashes, including five with injuries. Most were related to vehicle maintenance. 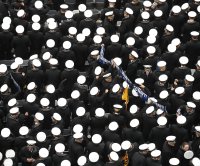 U.S. News // 5 hours ago
Navy discharges 45 sailors over refusing COVID-19 vaccine
Jan. 27 (UPI) -- The U.S. Navy said it has discharged 45 service members who refused to be inoculated against the COVID-19 pandemic. 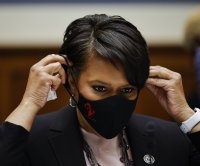 U.S. News // 7 hours ago
U.S. warns of heightened businesses risks in Myanmar
Jan. 26 (UPI) -- Ahead of the one-year anniversary of the military seizing control of Myanmar in a coup, the Biden administration is warning Americans about the heightened-risk of doing in business in Asian nation.

U.S. News // 11 hours ago
Bomb cyclone set to blitz Boston with blizzard conditions
A still-developing winter storm is set to become a major nor'easter that will bombard New England with heavy snow and blizzard conditions this weekend.

U.S. News // 11 hours ago
Suspect in killing of Houston constable deputy arrested in Mexico
Jan. 26 (UPI) -- Police on Wednesday arrested Oscar Rosales, 51, after he was suspected of shooting and killing Harris County Cpl. Charles Galloway, 47, during a traffic stop over the weekend.
Advertisement