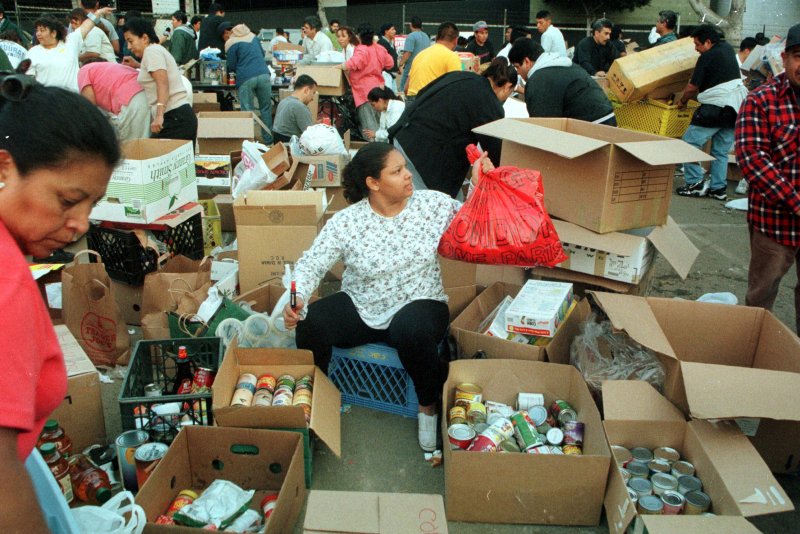 Hundreds of volunteers whose family members were suffering the wrath of Hurricane Mitch box up food donations in a spontaneous effort, November 5, 1998, in a downtown Los Angeles parking lot. Hondurans who have had temporary protected status in the U.S. since 1999 will no longer have that designation starting in 2020. File Photo by Jim Ruymen/UPI | License Photo

May 4 (UPI) -- The U.S. Department of Homeland Security announced Friday it would revoke temporary protected statuses offered to Hondurans on Jan. 5, 2020.

Homeland Security officials are offering designated Hondurans who have lived and worked in the U.S. 20 months to leave unless they gain immigration status. Officials enacted the temporary protected status designation for Hondurans in 1999 after Hurricane Mitch hit the Latin American country a year earlier.

The storm killed more than 5,000 people in Honduras and prompted Francisco Roque-Castro, the World Food Program's Regional Director for Nicaragua, to say Central America had "stepped back 20 years in one day." The U.S. granted more than 86,000 Hondurans temporary protected status after the storm, the Washington Post reported. About 50,000 Hondurans remain under that status.

Since then, "conditions in Honduras that resulted from the hurricane have notably improved," particularly since October 2016, Homeland Security said in a news release. The country, though, is still struggling to confront its problems with violent crime and corruption. After a disputed presidential election last year, at least 30 people died amid protests in the nation.

The department said Hondurans with temporary protected status will need to re-register for the designation so they can work in the U.S. until the 2020 deadline.

Homeland Security said it would work with Honduras and the U.S. State Department to "facilitate an orderly transition."