Trump: 'No reason' to apologize for profane immigration remarks

President Donald Trump said there was no reason to apologize for derogatory remarks he made about African countries in January, while speaking at a joint news conference with Nigerian President Muhammadu Buhari Monday. Photo by Pat Benic/UPI | License Photo

April 30 (UPI) -- U.S. President Donald Trump declined to apologize for derogatory remarks he made about African countries during a joint news conference with Nigerian President Muhammadu Buhari on Monday.

Trump said there is no reason to apologize for the remarks described as "vile and racist" by Sen. Dick Durbin, D-Ill., in January and referred to U.S. immigration policies as "a disaster."

"They're laughed at all over the world for their stupidity and we have to have strong immigration laws," he said.

In response to the remarks, which Trump initially denied, Buhari said he is "very careful with what the press says about people other than myself."

"I'm not sure about the validity or whether that allegation against the president was true or not, so the best thing for me is to keep quiet," Buhari said.

Trump said the comments didn't come up in his discussion with Buhari earlier in the day, adding some African countries are "very tough places to live in."

"You do have some countries that are in very bad shape," Trump said to Buhari. "The president [Buhari] knows me, and he knows where I'm coming from, and I appreciate that."

RELATED At least 16 people killed in attack on Nigerian church

Trump said he was moved and inspired by stories of Chibok schoolgirls rescued after being kidnapped by Boko Haram in Nigeria and called for Congress to close "deadly immigration loopholes exploited by terrorists, traffickers and criminals."

Trump also said he has been monitoring the caravan of Central American migrants making their way to the U.S.-Mexico border and again called for increased border security.

While discussing his threat to pull out of the Iran nuclear deal, Trump said Israeli Prime Minister Benjamin Netanyahu's allegation that Iran is secretly pursuing a nuclear program has proven he's been "100 percent right."

"I've been saying that's happening, they're not siting back idly, they're setting off missiles which they say are for television purposes, I don't think so," Trump said.

Trump said he would make a final decision on whether or not to pull out of the deal on May 12.

RELATED UNICEF: Boko Haram has abducted over 1,000 kids in Nigeria

Trump added his stance on Iran's nuclear program would also "send the right message" to North Korea, ahead of proposed talks with Pyongyang, which he suggested could be held in the Korean Demilitarized Zone.

"Some people don't like the look of that, some people like that very much," he said. "There's something I like about it because you're there, you're actually there where if things work out there's a great celebration to be had on the site not in a third party country."

Trump added he believes the discussions with North Korea will be a success and reiterated that he is willing to leave the talks.

"If its not a success, I will respectfully leave," he said.

U.S. News // 23 hours ago
Trump threatens to send military to 'solve' violent U.S. protests
June 1 (UPI) -- President Donald Trump on Monday declared he has mobilized all federal response and encouraged governors to establish an "overwhelming law enforcement presence" in response to protests over the killing of Geroge Floyd.

U.S. News // 3 hours ago
Illinois man charged with handing out 'bombs' during Minneapolis protests
June 2 (UPI) -- Federal authorities have charged an Illinois man for crossing state lines into Minnesota where he filmed himself passing out explosive devices and urging people to throw them at police and buildings.

U.S. News // 7 hours ago
U.N. report: Taliban maintains ties with al-Qaida despite U.S. peace deal
June 1 (UPI) -- The Taliban has maintained close ties with al-Qaida, according to a recently released U.N. report, suggesting it is undermining the agreement it signed with the United States earlier this year.

U.S. News // 14 hours ago
Report: Pandemic's U.S. economic hit could last 11 years, cost $8 trillion
June 1 (UPI) -- The coronavirus pandemic will affect the economic health of the United States for the next decade, with a $7.9 trillion hit on the country's gross domestic product over the next 11 years, a federal agency said Monday.

U.S. News // 15 hours ago
U.S. manufacturing reports show slight hope in long recovery ahead
June 1 (UPI) -- Manufacturing reports released Monday in the Midwest and U.S. showed a slight improvement that may signal the worst of the pandemic's economic harm has passed in that economic sector. 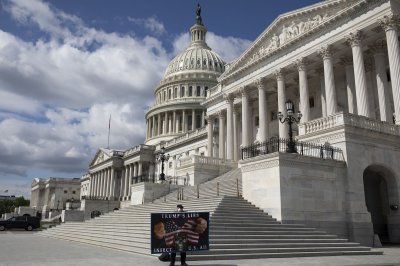