Roy Moore, who lost Alabama's Senate race in December, has sued three women who accused him of sexual assault and two other people, claiming they sought to defame him as part of a political conspiracy File Photo by Cameron Carnes/UPI | License Photo

April 30 (UPI) -- Former Alabama Senate candidate Roy Moore filed a lawsuit Monday claiming the women who accused him of sexual assault sought to defame him as part of a political conspiracy.

The suit, jointly filed with his wife Kayla Moore, names three women who made accusations against Moore including Leigh Corfman, Beverly Young Nelson and Tina Johnson as defendants, as well as two other people.

Corfman through an interview with the Washington Post accused Moore of sexually touching her when she was 14 years old and he was a 32-year-old assistant district attorney in 1979.

Nelson said Moore groped her in a car in 1977 when she 16 years old, Johnson said Moore grabbed her buttocks while she was in his office seeking legal advice and Gibson said Moore's handwriting in Johnson's high school yearbook matched his writing in a card he sent her when they were dating.

"I never knew them," Moore said of the accusers at a press conference Monday. "There is no truth to the allegations."

The lawsuit claims Corfman, Nelson and Johnson were the only women to accuse Moore of "improper conduct" and did so with the intent of derailing his Senate campaign.

"This was filed because the people of Alabama deserve to know the truth," Melissa Isaak, an attorney representing Moore, said, according to CNN. "The accusations made against Judge Moore during the US Senate campaign arose from a political conspiracy to destroy his personal reputation and defeat him in the special Senate election for United States Senate."

RELATED Ethics watchdog: Mulvaney may have 'misled' Senate at confirmation

Isaak noted the accusations came about a month before the election and decades after the alleged conduct occurred.

"Those accusations involved events that supposedly occurred from 26 to 40 years ago," the lawsuit states. "Yet they all coincidentally surfaced for the first time within a seven-day period, a mere 32 days before the December 12 general election."

Corfman's attorney, Neil Roman, issued a statement saying the claims in Moore's lawsuit "have no more merit than those he has made before."

"Leigh Corfman stands by the accuracy of every one of her statements about Mr. Moore's sexual abuse of her when she was a 14-year-old high school freshman and he was a 32-year-old assistant district attorney," Roman said. "Ms. Corfman is no longer a teenager and is not going let Mr. Moore victimize her again."

Richard Hagedorn and Debbie Wesson Gibson -- the two other people named in the suit -- are accused of "revealing their true political agenda to ignore the truth" in social media posts meant to "discredit local politicians and Senate candidates."

The suit is seeking compensatory damages from all defendants listed along with interest from the date of the injuries and the court costs as well as punitive damages "in an amount that will adequately reflect the enormity of the defendants' wrongful, outrageous act."

During the press conference Moore said he was willing to be deposed and that he has taken a lie detector test.

Moore also said he has no plans to run for office and political pursuits weren't a motive for filing the suit. 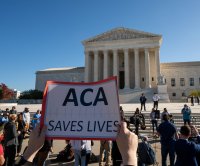