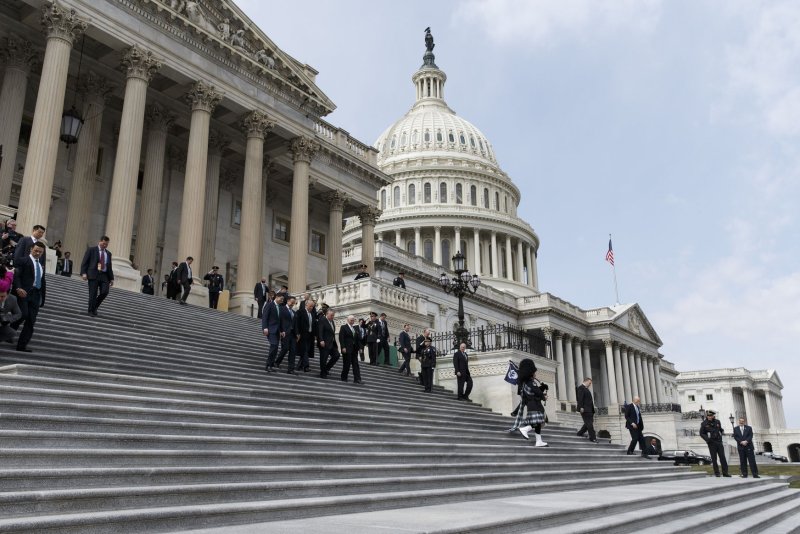 A $1.3 trillion spending bill to fund the government through September moved to the Senate Thursday, which must give unanimous consent to send it to President Donald Trump and avoid a government shutdown Friday night. Photo by Alex Edelman/UPI | License Photo

March 22 (UPI) -- The House passed a $1.3 trillion spending bill Thursday to fund the government through September and avoid another government shutdown this weekend.

The 2,232-page bill passed with a vote of 256-167, with the majority of each party supporting the legislation.

The bill now moves to the Senate, where unanimous consent is needed to avert a shutdown by midnight Friday.

Lawmakers unveiled the package less than 24 hours before the House vote. It includes a $700 billion budget for defense and $591 billion for non-defense spending.

Military funding will be increased by $61 billion, including pay increases for service members.

Included in the omnibus package is also $380 million in election technology grants to secure digital systems involved in U.S. elections. An additional $307 million will be granted for FBI counterintelligence efforts against Russian cyberattacks.

The bill also includes a spending increase on opioid treatment, prevention and research by nearly $3 billion. Infrastructure spending will increase by $10 billion, while another $1.6 billion will go toward new border security funding for more than 100 miles of physical barriers along the border with Mexico, and related technology.

Additional funding that could be used to fund the Gateway Project, a $900 million rail proposal under New York's Hudson River, is also included. President Donald Trump had threatened to veto the spending bill if it's included, but White House budget director Mick Mulvaney said Thursday Trump will sign the omnibus bill if it reaches his desk.

Daniel Uria contributed to this report

U.S. News // 12 hours ago
Intense heat scorches much of the East Coast, with more still to come
A major spell of heat has arrived on the East Coast, bringing the season's highest temperatures for many and even setting daily records for some.