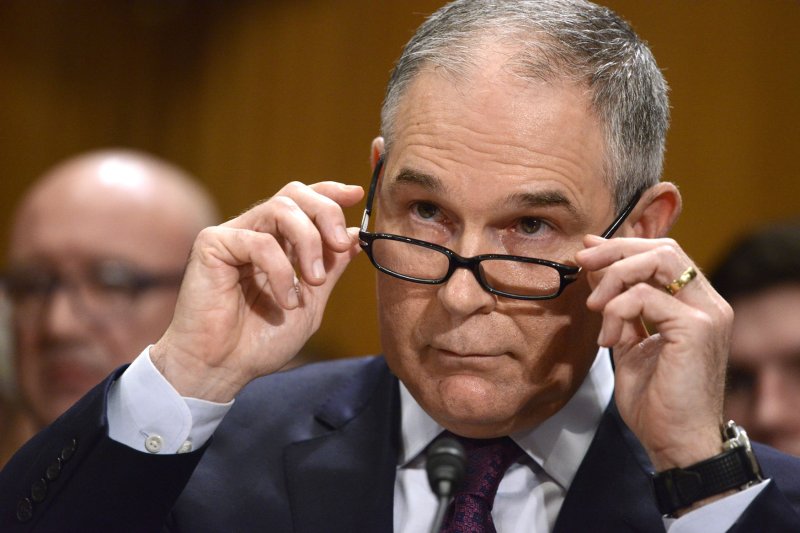 EPA Administrator Scott Pruitt is being scrutinized for the amount of money it took to send him to Italy last year. Documents show the costs amount to $120,000. File Photo by Mike Theiler/UPI | License Photo

Costs for Pruitt's security detail added more than $30,000 to the bill than previously revealed, according to the Environmental Integrity Project, a non-partisan and non-profit watchdog group.

The trip, taken last June, is also under review by the agency's inspector general.

Previously released travel documents showed the EPA spent close to $90,000 to send Pruitt and his staff to Italy for one day for the G7 environmental summit. Included in that amount was a $36,000 military flight so Pruitt could join President Donald Trump at a Cincinnati event, and then make it to New York in time for his flight to Rome.

A statement by EPA spokesman Jahan Wilcox said the agency did not deviate from standard protocol when approving that security detail, and followed the same procedures it's has used for nearly 15 years.

"That's a lot of money for Mr. Pruitt to tour the Vatican, pose for photos, and tell his European counterparts that global warming doesn't matter," he said. "And it doesn't even include salary costs for everyone who signed up for this tour."

Pruitt has also faced criticism for flying luxury class during official trips. According to records the EPA provided to the House Oversight Committee, Pruitt spent more than $105,000 in taxpayer funds on first-class flights since becoming President Donald Trump's EPA chief in February 2017.

U.S. News // 1 hour ago
Utah bills would ease student dress codes for religious, cultural items
Feb. 6 (UPI) -- As high school students around the country fight for the right to wear religious and cultural items at graduation and athletic events, Utah is considering legislation to allow it.

U.S. News // 1 hour ago
Poll: American support for Ukraine remains high after year of conflict
Feb. 6 (UPI) -- A majority of Americans remains supportive of Ukraine as Russia's war in that country enters its second year, according to a poll released Monday.

U.S. News // 4 hours ago
U.S. farm belt expanding its role in renewable natural gas
Feb. 6 (UPI) -- Among the largest RNG facilities in the portfolio of Northern Biogas is an Idaho operation drawing on the waste of thousands of dairy cattle.

U.S. News // 5 hours ago
Dell plans to cut more than 6,600 Jobs due to plummeting PC sales
Feb. 6 (UPI) -- Dell plans to lay off 6,650 workers as the company responds to waning demand for its personal computers -- the latest tech giant forced to downsize as millions of inflation-weary consumers change their spending habits.

U.S. News // 5 hours ago
Buffalo hit with 3.8M earthquake; no damage reported
Feb. 6 (UPI) -- A 3.8-magnitude earthquake near Buffalo, N.Y., Monday morning rattled the nerves of residents around the region but not much else with no immediate damage or injuries reported, officials said.