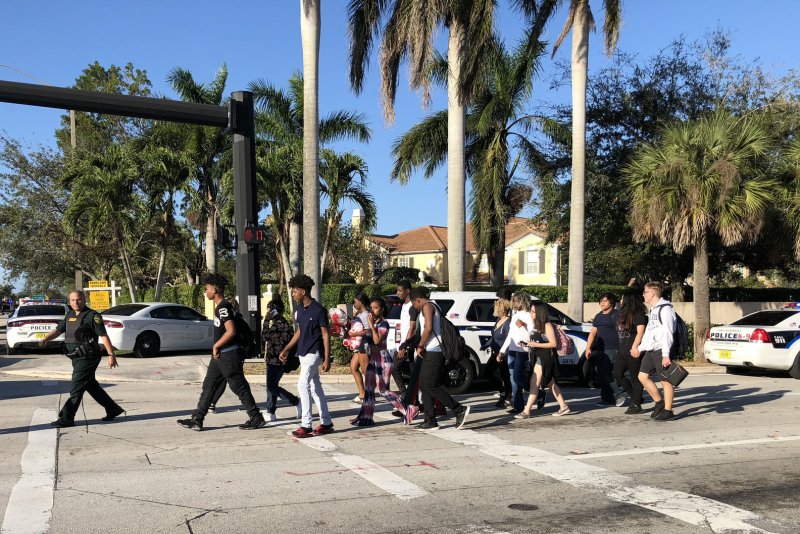 Parents are escorted to a holding area Wednesday to wait for their children near Marjory Stoneman Douglas High School in Parkland, Fla., where a shooting killed 17 people and injured several more. Photo by Gary Rothstein/UPI | License Photo

Feb. 15 (UPI) -- Two athletic coaches killed in Wednesday's school shooting in Florida are being hailed as a hero -- one for using his body to shield students from a hail of bullets.

Football coach Aaron Feis is among the 17 dead in the shooting at Marjory Stoneman Douglas High School in Parkland, Fla., which began Wednesday afternoon when a gunman arrived on the campus wielding an AR-15 assault rifle.

As the gunfire erupted, friends and students said Feis didn't hesitate to step in the line of fire.

"It didn't surprise me when I heard he jumped in front of a girl and shielded her from the shooter, it doesn't surprise me a bit that he did that," Stoneman Head Football Coach Willis May told UPI Thursday. "He has such love and concern for other people."

May said Hixon, like Feis, is also a hero because he ran toward the scene to try to help others to safety. He said the two also served as security guards at the school, and "when something goes down, they are the first ones to rush in."

May said he'd worked with Feis for five years and called him one of the kindest men he has ever known -- a great family man who deeply loved his wife and daughter and was very close to his family.

After hearing news of Feis' death, May began getting text messages from students. One read, "Tell me it's not true."

"The kids loved him ... he was a good person, they could trust him to tell them the truth. He could be hard on them but knew how to love them too," May said. "He had such a big heart. He was actually a big ole' teddy bear."

May had worked with Hixon for three years and spoke just as highly of him, saying "he had no fear."

"He was good to the kids," Mau said. "Like Feis, he was hard on them sometimes, but always fair."

More stories of heroism may come out of the massacre. May said one of the football players used a towel to wrap a student's wounded leg, which was bleeding heavily.

Thursday, May said he was still trying to come to grips with what happened -- recalling that after the fire alarm and CODE Red alert, he secured the physical education area, placed students and coaches in lock-down mode and went searching for the source of the gunfire.

RELATED Florida high school shooting victims: Who they were

"I heard the shots but couldn't get too close. There is a big courtyard area between the two buildings. I was trying to stay hidden while keeping my kids safe," he said.

May said it will be tough moving forward, but that he has confidence the school and community will heal.

"We can't let evil win, we just don't have a choice," he said. "It hurts right now. But this community is strong. Our admin and staff are strong and we still have four other coaches in the building who are strong.

"They'll make sure we come out of this and everybody pulls together to do what we've got to do."

It is with Great sadness that our Football Family has learned about the death of Aaron Feis. He was our Assistant Football Coach and security guard. He selflessly shielded students from the shooter when he was shot. He died a hero and he will forever be in our hearts and memories pic.twitter.com/O181FvuHl3

U.S. News // 9 hours ago
U.S. implements travel restrictions for DRC, Guinea amid Ebola outbreaks
Feb. 27 (UPI) -- The U.S. government is implementing new measures to prevent the spread of the Ebola virus by travelers from Guinea and the Democratic Republic of Congo entering the country