Feb. 15 (UPI) -- Forecasters say heavy rain and flooding is possible in the Northeast Thursday, as an unsettled weather pattern continues to develop.

Warmer temperatures are expected across several eastern states before a strong cold front pushes through, producing heavy rainfall that could flood parts of the Ohio Valley and Northeast.

Flash flood watches are now in effect for six states, from Kentucky to New York.

The system will bring some snow and much needed rain for parts of the West, but forecasters say snow accumulations are expected to be light.

Due to severe drought conditions in the Southwest and parts of the Central Great Basin, the expected rainfall and higher elevation snow should help alleviate the conditions, the National Weather Service said Thursday.

Across much of the South, temperatures are expected to be 20 to 30 degrees above normal as warm, moist air moves through the Southern Plains and Mid-Atlantic over the next few days -- bringing showers and thunderstorms along a cold front.

This storm system is expected to move south and east through the Mid-Atlantic region, Ohio and Tennessee Valleys, the lower Mississippi Valley and the Southern Plains by late Friday. West Virginia and parts of western Pennsylvania and could receive 1 to 3 inches of rain by early Sunday.

Temperatures are expected to dip to 30 degrees below normal as the high pressure moves in, forecasters said.

Heavy rainfall could bring flooding to parts of the Ohio Valley and Northeast. Warm temperatures expected across the eastern U.S. before a strong cold front sweeps eastward. Beneficial rain and snow for parts of the West.https://t.co/yHPbPmdOvO pic.twitter.com/ko8gKSh6S2 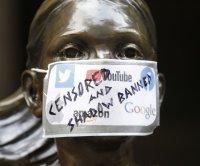