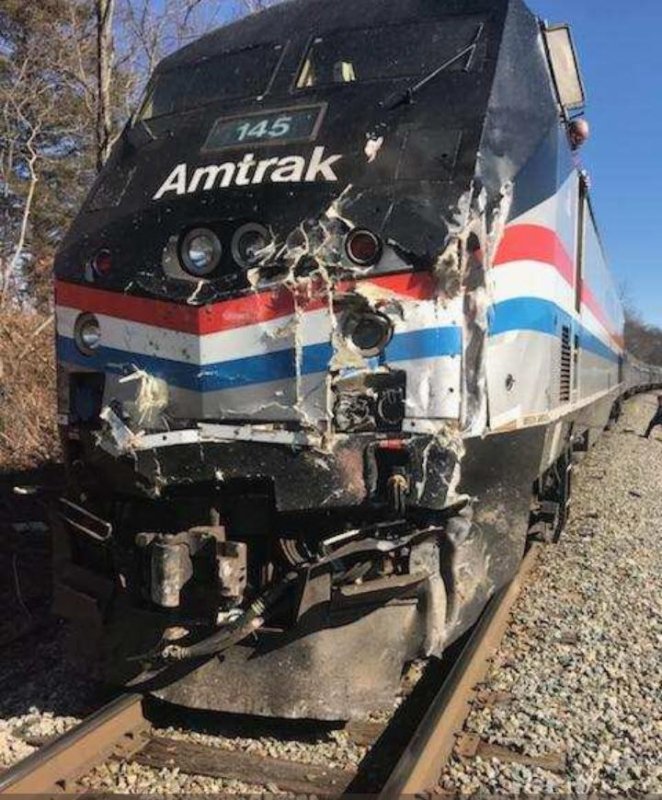 Jan. 31 (UPI) -- An Amtrak train carrying Republican members of Congress to a retreat in West Virginia on Wednesday collided with a trash truck near Charlottesville, Va. -- killing the driver and injuring others.

Albemarle County, Va., police said there were at least three serious injuries from the garbage truck, two of whom were flown to a hospital.

"An Amtrak train came into contact with a vehicle that was on the tracks at 11:20 a.m. in Crozet, Va. There are no reported injuries to passengers or crew members," Amtrak said in a statement. "Local law enforcement is investigating the incident and crews are inspecting equipment for damage. The train originated in Washington, D.C."

A spokesperson for the Congressional Institute told NBC one congressional member was sent to the hospital, and two other people were examined with minor injuries.

The hospitalized congressman was Rep. Jason Lewis, R-Minn., who was treated for a concussion at the University of Virginia Medical Center in Charlottesville, Va. According to a statement from his Twitter account, Lewis was discharged and went on to the GOP retreat.

Sen. Jeff Flake, R-Ariz., told CNN one of the truck's drivers died in the collision.

"The president has been fully briefed on the situation in Virginia and is receiving regular updates. There is one confirmed fatality and one serious injury," White House press secretary Sarah Sanders said. "Senior Administration officials are in regular contact with Amtrak and state and local authorities. Our thoughts and prayers are with everyone that has been affected by this incident."

The president spoke to House Speaker Paul Ryan, who was also aboard the train, by phone after the crash.

The cause of the crash was not immediately known.

The office of Rep. Roger Marshall, R-Kan., said the lawmaker and physician was among those treating injured passengers. Reps. Don Bacon, R-Neb., and Bradley Byrne, R-Ala., tweeted from the train they were fine.

The train carrying GOP members to our retreat had a collision, but Rebecca and I are both okay. Security and doctors on board are helping secure the scene and treat injuries.

Rep. Greg Walden, R-Ore., posted a photo of the wreckage showing trash strewn about the ground and Rep. Jeff Denham posted a photo showing front end damage to the train.

"We're fine, but our train hit a garbage truck," Walden tweeted. "Members with medical training are assisting the drivers of the truck."

Virginia congressman Tom Garrett was not on the train but he issued a statement offering his thoughts.

"My colleagues and my friends were on the train, and it is very likely that one or more Fifth District residents were injured during today's collision," he said. "So I would ask that all take a moment today to think about everyone on the train, and keep them in your hearts, thoughts and prayers"

Congress is out of session for the rest of the week.