Visa to eliminate customer signatures for cards with security chips

Visa Inc. said some 2.5 million brick-and-mortar retailers will no longer have to ask for signatures for customers paying with a Visa credit card on a terminal that uses chip technology. File Photo by Aaron M. Sprecher/UPI | License Photo

Jan. 12 (UPI) -- Visa Inc. announced Friday it would no longer require businesses to get customers' signatures on purchases made with chip-card security.

More than 2.5 million brick-and-mortar stores that have chip-reading terminals will no longer have to get customer signatures, starting in April.

Signatures are an added level of security for customers, but Visa said there's been added protection from the introduction of chip-enabled cards, called EMV.

"Making the signature requirement optional for EMV chip-enabled merchants is the responsible next step to enhance security and convenience at the point of sale," Dan Sanford, vice president of consumer products at Visa, said in a statement.

Retailers, in particular Walmart, have sought to end the requirement for customer signatures because those sales must be processed in a way that costs more than double the sales that require a PIN.

U.S. News // 13 minutes ago
Surge of heat to bring hottest weather since last summer to Northeast
High temperatures ranging from the upper 80s to the mid-90s are on the way for close to 100 million people in the Northeast this weekend. 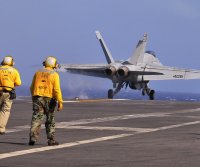 U.S. News // 52 minutes ago
Naval secretary visits USS George Washington after multiple crew suicides
May 18 (UPI) -- The Secretary of the Navy visited the USS George Washington in an effort to get a first-hand look at conditions aboard the Nimitz class aircraft carrier after a number of suicides among the crew, the Navy announced.