The National Highway Traffic Safety Administration announced the additions, which affect airbags fitted to vehicles created in 2009, 2010 and 2013.

"Approximately 34 million vehicles are currently under recall for approximately 46 million defective Takata air bags that can explode when the air bag deploys, causing serious injury or even death," the NHTSA said.

The organization said all additional airbag inflators would be recalled by December 2019 and bring the total number of affected devices to 65-70 million.

The cause of the safety concern stems from a chemical present in the device that creates a small explosion -- to inflate the airbags quickly during a crash. When stored in high temperatures or in strong humidity, though, the substance can burn too quickly and blow apart, and potentially send shrapnel into the passenger cabin.

The Takata devices have been linked to 20 deaths and 180 people hurt worldwide.

The NHTSA encouraged owners to get their vehicles fixed "as soon as possible," and some manufacturers warned against anyone sitting in the front passenger seat until repairs are completed.

Federal officials said last month that more than half of the vehicles involved in the recall have yet to be fixed.

U.S. News // 6 hours ago
Air Force not likely to meet goal of 100% active-duty vaccination by Nov. 2
Oct. 27 (UPI) -- Air Force officials on Wednesday said the military branch was not likely to reach its goal to vaccinate 100% of active-duty Air Force Airmen and Space Force Guardians by Tuesday.

U.S. News // 7 hours ago
COVID-19 cases unreported in largest meatpacking companies, probe finds
Keeping lax safety standards across the U.S. meatpacking industry was a "political decision" by the Trump administration, according to the House Select Subcommittee on the Coronavirus Crisis.

U.S. News // 15 hours ago
Deadly nor'easter knocks out power for more than 500,000 in N.Y., New England
Oct. 27 (UPI) -- More than a half-million customers were without electricity in the Northeast early Wednesday due to heavy rains and strong winds from a major nor'easter that's also caused serious flooding in some areas. 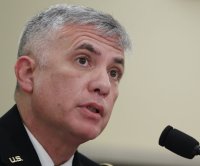