18 states get minimum wage increase for 2018

Fast food workers march in St. Louis on September 4 to demand $15 per hour wages. On Jan. 1, 18 states increased their minimum wage and Washington has the highest rate of $11.50 per hour. File Photo by Bill Greenblatt/UPI | License Photo

Washington will get a 50-cent raise, giving the state the highest minimum wage in the country: $11.50 per hour.

Jared Bernstein, a senior fellow at the Center on Budget and Policy Priorities, told The Hill that states are more willing to pass legislation to raise minimum wage amounts because there are fewer high-wage jobs available and low-wage workers have more education than in the past.

"As the population of low-wage workers has become a bit more upscale, many places are willing to adjust their minimum wages, especially given the pervasive research that supports moderate increases," Bernstein said. "States and localities have been increasingly willing to raise their own minimum wages as the federal value has been stuck at $7.25."

The Economic Policy Institute says the wage is "too low."

"If [minimum wage] had kept up with productivity since the late 1960s, the federal minimum wage would be worth about $19 an hour in 2018," the think tank said in a statement.

As higher wages, including living wages, become a greater part of the political conversation in the United States, the country still lags behind other countries in terms of a minimum wage that is comparable to the country's cost of living.

According to the Washington Post, the federal rate of $7.25 is the lowest national minimum wage, relative to the median wage, of any wealthy nation in the Organization for Economic Cooperation and Development.

Congressional Republicans have blocked minimum wage increases since the 2009 raise, despite polls that show the majority of both parties agree with raising it.

According to the Huffington Post, the 18 states where the minimum wage increased on Jan. 1 include: 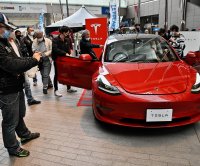 U.S. News // 1 hour ago
Lucid Motors announces NYC offices, arrival of new vehicle
June 22 (UPI) -- Lucid Motors, the Silicon Valley electric vehicle startup that holds the distinction of having the longest range of any other EV, announced the opening of a new flagship office in New York City Monday.

U.S. News // 3 hours ago
Deaths at U.S. nursing homes surged by 170,000 in 2020, watchdog report says
June 22 (UPI) -- Deaths among Medicare patients in nursing homes last year surged by more than 30%, with two pronounced spikes at different times of the year, according to a report by the federal health department's inspector general. 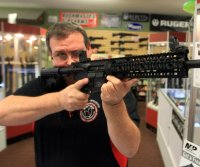