Trump boasts of cutting 'the red tape of regulation'

"As a result, the never-ending growth of red tape in America has come to a sudden, screeching and beautiful halt," he said on Thursday.

Trump added the "ever-growing maze of regulations, rules, restrictions has cost our country trillions and trillions of dollars, millions of jobs, countless American factories, and devastated many industries."

He said federal agencies achieved $8.1 billion in lifetime net regulatory cost savings in 2017, the equivalent of $570 million per year.

Trump also said the administration surpassed its goal of adding "zero new regulatory costs onto the American economy" by "a lot" in its first 11 months.

"We blew our target out of the water," Trump said. "We canceled or delayed over 1,500 planned regulatory actions - more than any previous president by far."

He said the results could be observed in the "record" level of the stock market, which he said created "$5 trillion in new wealth" as of three weeks ago and had likely approached $6 trillion by the time of his remarks.

Trump urged his Cabinet secretaries, agency heads and federal workers to cut more regulations in 2018 and criticized the state of regulations by unfurling a massive chart depicting the process necessary to get all of the permits needed for a highway or roadway project.

"It really explains what a disaster it is," Trump said. "We want to take that process down to maybe one year."

RELATED Omarosa on White House role: Saw things that 'made me uncomfortable'

Trump concluded the remarks by cutting a ribbon representing the red tape connecting a stack of 20,000 pages of federal regulations which represented government regulations in 1960 and a 185,000-page pile representing regulation today.

"We're going to cut a ribbon because we're getting back below the 1960-level, and we'll be there fairly quickly," Trump said. "So together, let's cut the red tape. Let's set free our dreams. And, yes, let's make America great again." 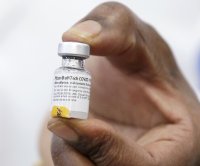 U.S. News // 17 hours ago
Ashish Jha: FDA may rule on boosters for kids under 5 in 'next few weeks'
May 22 (UPI) -- White House COVID-19 response coordinator Dr. Ashish Jha said the FDA could decide on whether to make vaccine booster shots for children younger than 5 in "the next few weeks."

U.S. News // 19 hours ago
Chicago police arrest 2 in McDonald's shooting
May 22 (UPI) -- Chicago police said they charged two men with a deadly mass shooting that occurred at a McDonald's restaurant last week that started with an argument between a man and woman.

U.S. News // 21 hours ago
Shipment of 78,000 pounds of baby formula from Germany arrives in U.S.
May 22 (UPI) -- A shipment of infant formula arrived in Indianapolis on Sunday as the Biden administration works to address a nationwide shortage.

U.S. News // 1 day ago
Intense heat scorches much of the East Coast, with more still to come
A major spell of heat has arrived on the East Coast, bringing the season's highest temperatures for many and even setting daily records for some.