State of emergency declared in San Diego due to Lilac Fire

A Los Angeles County Fire helicopter flies over during the 'Skirball Fire' in California. Photo by John Cetrino/EPA

Fires continue to burn in destroyed homes during the 'Skirball Fire' which began in Bel-Air, California. Photo by John Cetrino/EPA

Dec. 7 (UPI) -- California Gov. Jerry Brown declared a state of emergency in San Diego County on Thursday after one of six wildfires began rapidly burning in the area.

Brown said the Lilac Fire has threatened thousands of structures and critical infrastructure and caused the evacuation of residents.

He had previously declared states of emergency in Los Angeles and Ventura counties.

Two more blazes broke out Thursday in Southern California, bringing the total number of fires to six and the number of acres scorched to 117,000, fire officials said.

The Lilac Fire, the sixth fire, erupted Thursday morning in San Diego County near Bonsall. As of 2:35 p.m., it was 2,500 acres in size with zero containment. Cal Fire said the blaze destroyed two structures and damaged 12 others.

Officials warned the worst is yet to come, as 30 mph to 50 mph winds are expected to fan the flames.

"These are the kind of conditions that keep public safety officials up at night," Janet Upton, deputy director of the California Department of Forestry and Fire Protection, said. "This is that worst-case scenario that we prepare for but hope doesn't happen."

In anticipation of the blaze, all Los Angeles Unified Schools in the San Fernando Valley, along with 17 schools on the city's Westside, will be closed for the remainder of the week.

"These are days that break your heart," Los Angeles Mayor Eric Garcetti, who declared a state of emergency for his city, said. "But they are also days that show the resilience of our city."

The Liberty Fire erupted in an unincorporated area near the town of Murrieta in Riverside County around 1:15 p.m. The fire consumed 300 acres and was 5 percent consumed.

The Riverside County Fire Department said the blaze was moving at "moderate to rapid" speeds. Officials ordered evacuations in the town and parents were asked to pick up their children from Visa Murrieta High School, which was in the vicinity of the fire.

The Liberty Fire was one of six affecting the region and prompting at least 160,000 people to flee their homes.

Firefighters were dealing mainly with the Thomas Fire, the largest of the four, which started on Monday at 50 acres and swelled to 96,000 acres as of 10 a.m. Thursday. The blaze was 5 percent contained.

Officials ordered fresh evacuations in the forested areas of Ojai, which is near the fire's northern edge.

Ventura County Sheriff's Sgt. Kevin Donoghue said officials found the body of a woman near the site of a car crash within the Thomas Fire area, though her cause of death was unclear.

The Creek Fire burned 12,605 acres and destroyed 15 buildings and damaged another 15. It was 10 percent contained.

Los Angeles Fire Capt. Branden Silverman told the Los Angeles Times 110,000 were evacuated in the path of the fire. Two firefighters battling the blaze have been hospitalized and were expected to recover.

The blaze jumped Highway 101 near Carpinteria Thursday; the highway has been closed off and on over the past 24 hours, CNN reported.

The Skirball Fire burned through 475 acres and was 20 percent contained as of 3:20 p.m., leading to a brief shutdown of the 405 Freeway. The blaze in Bel-Air destroyed four homes and damaged 11 others. About 700 homes were evacuated.

Fire officials tried to prevent the blaze from jumping the 405 Freeway toward the Getty Center. 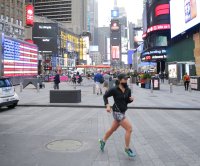 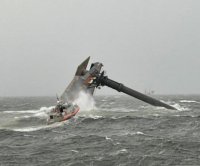