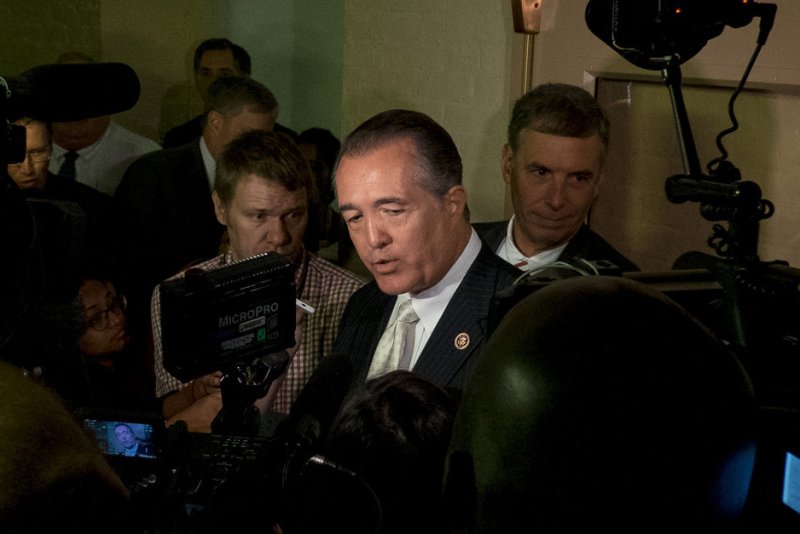 Dec. 7 (UPI) -- Rep. Trent Franks, R-Ariz., on Thursday announced his resignation after the House Committee on Ethics opened an investigation into misconduct allegations.

Franks denied his actions were sexual in nature, saying he discussed infertility problems and his family's attempts at surrogacy with two female staffers.

"I want to first make one thing completely clear. I have absolutely never physically intimidated, coerced, or had, or attempted to have, any sexual contact with any member of my congressional staff," he said in a lengthy statement. "However, I do want to take full and personal responsibility for the ways I have broached a topic that, unbeknownst to me until very recently, made certain individuals uncomfortable."

Franks said he "deeply" regrets discussing the topic with the women and he's resigning because he doesn't believe he would be fairly investigated before the allegations were "sensationalized."

"Rather than allow a sensationalized trial by media damage those things I love most, this morning I notified House leadership that I will be leaving Congress as of January 31st, 2018," he said.

The ethics committee also announced it is investigating Rep. Blake Farenthold, R-Texas, over whether he sexually harassed a former member of his staff, discriminated against her based on gender or retaliated against her for complaining of discrimination.

U.S. News // 21 hours ago
Dershowitz: Democrats' case meritless because no crime committed
Jan. 26 (UPI) -- Trump defense lawyer Alan Dershowitz said Sunday he believes Democrats must charge the president with a crime to remove him from office.