EPA Administrator Scott Pruitt speaks during a press briefing at the White House in Washington, D.C., on June 2. On Monday, environmental groups sued the EPA for missing a deadline set forth by the Clean Air Act. File Photo by Kevin Dietsch/UPI | License Photo

Dec. 4 (UPI) -- Several environmental and health groups filed a lawsuit against the Environmental Protection Agency Monday for missing a deadline to enforce key aspects of the Clean Air Act.

The groups, which include Earthjustice, the American Lung Association and Sierra Club, among others, said the EPA violated a provision in the Clean Air Act, which requires the agency to release information by Oct. 1 about which areas of the country are not in compliance with a 2015 rule to reduce ground-level ozone, or smog pollution.

"After extensive scientific study showed that the EPA's prior smog standard was inadequate to protect public health and welfare, the agency strengthened it in 2015," Seth Johnson, a staff attorney at Earthjustice, wrote in a blog post Monday. "It estimates that the new standard will prevent 230,000 asthma attacks a year if the country meets it. Millions of people live in communities that don't meet the new standard."

EPA Administrator Scott Pruitt, who fought against the Clean Air Act rule when he served as attorney general of Oklahoma, tried to get an extension on the October deadline in June. But environmental groups threatened legal action, causing Pruitt to cancel his extension attempt.

The Clean Air Act requires counties that are not in compliance to either develop measures to reduce ozone or have the federal government take on the task.

"We are extremely disappointed but not surprised by Administrator Pruitt's unwillingness to declare the areas in our country that are not meeting ozone standards. Every day that passes, people are exposed to dangerous pollutants," Dr. Georges Benjamin, executive director of the American Public Health Association, said in a statement. "Ozone is a harmful and widespread pollutant that can cause asthma attacks, respiratory damage and even early death. Its cleanup is critical."

The EPA told The Hill it normally does not comment on pending legislation.

U.S. News // 11 hours ago
Powerball pot grows to $730M after no winner in Saturday's drawing
Jan. 17 (UPI) -- The Powerball jackpot has grown to an estimated $750 million, the fourth highest in the 28-year-history of the game, as no winner was announced from Saturday's drawing. 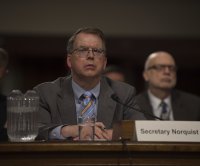