This image released by the North Korean Official News Service shows the launch of the Intercontinental ballistic missile Hwasong-14 during its second test-fire on August 8. Some analysts believe missiles like these can reach Hawaii, where officials have begun a warning system in case of a missile attack. File Photo KCNA/UPI | License Photo

The statewide warning siren system will include an attack warning tone that is scheduled to begin testing Friday and will be added to the state's monthly siren tests for tsunamis.

"On the first business day of every month, the state and the counties normally conduct a test of the attention alert signal, which is a steady tone," HEM administrator Vern Miyagi said in a public service announcement for the system. "Starting Dec. 1, a second tone, the attack warning signal, a wailing tone, will be added. The attack warning signal advises everyone to take immediate shelter -- get inside, stay inside, stay tuned."

As tensions between the United States and North Korea increased in recent months, Hawaiian officials began preparing for the possibility of a nuclear attack. Pentagon officials believe North Korea fired its third intercontinental ballistic missile since July on Tuesday.

"We do not want to cause any undue stress for the public," Miyagi said in July, but "we cannot wait to begin our public information campaign to ensure that Hawaii residents will know what do if such an event occurs."

About 4,600 miles of ocean separate Hawaii and North Korea, and analysts believe the North Korean missiles could reach as far as the west coast of the United States, putting Hawaii well within that reach -- something Hawaiians are constantly reminded about.

"One of the legacies of the Pearl Harbor attack is that residents of Hawaii feel a stronger sense of vulnerability than people on the United States mainland," Denny Roy, a research fellow at the East-West Center who focuses on North Korea and nuclear weapons, told The Atlantic. "Whenever the mainstream news reprises the issue of North Korea working toward a nuclear [intercontinental ballistic missile] and threatening to use it against the United States, people in Hawaii get nervous." 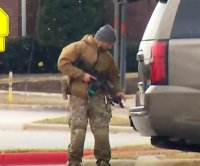