By Sara Shayanian and Danielle Haynes
1/15 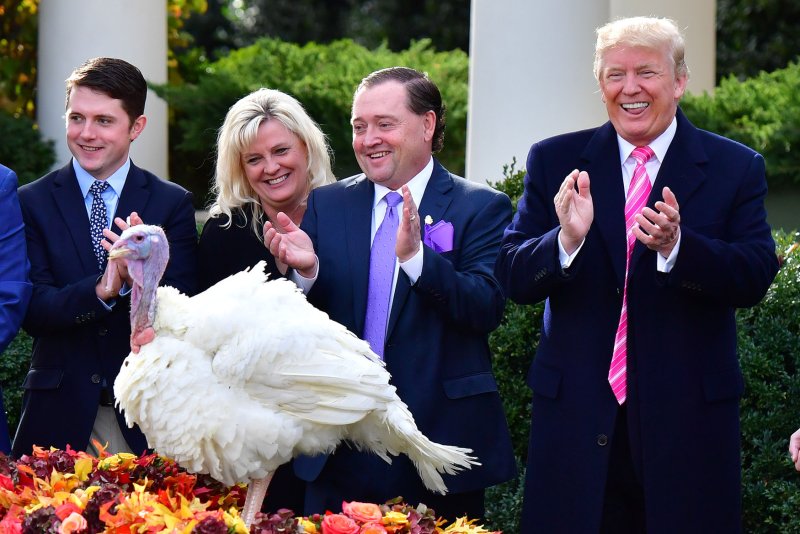 First lady Melania Trump and son Barron Trump were on hand for the ceremony as well as four teenagers from a 4-H program in Douglas County, Minn., who raised Drumstick.

"Over the past 10 months, Melania and I have had the pleasure of welcoming many, many special visitors to the great White House," Trump said. "We've hosted dozens of incredible world leaders, members of Congress and along the way a few very strange birds.

"But we have yet to receive any visitors quite like our magnificent guest of honor today -- Drumstick."

The president had two birds to choose between for the pardon -- Drumstick and Wishbone -- both of whom stayed overnight at the Willard InterContinental Hotel, a tradition for the turkeys paid for by the National Turkey Federation since 2004.

Though only one bird received a pardon this year, both will head to "Gobbler's Rest" on the campus of Virginia Tech University in Blacksburg, Va, after the ceremony.

Trump joked that though he has been active in overturning Obama's executive actions, he would not change Tator and Tot's fates.

"I have been informed by the White House counsel's office that Tator and Tot's pardons cannot under any circumstances be revoked," Trump said.

Tuesday's pardon follows a long line of White House Thanksgiving ceremonies, the origins for which date back to the Civil War era.

"It is often stated that President [Abraham] Lincoln's 1863 clemency to a turkey recorded in an 1865 dispatch by White House reporter Noah Brooks was the origin for the pardoning ceremony," the White House said.

By 1914, the opportunity to give a turkey to the president was open to the public -- and turkey gifts became a symbol of "good cheer" by the time former first lady Grace Coolidge accepted a bird from a girl scout in 1925. In 1978, a turkey presented to first lady Rosalynn Carter was sent to live in a mini zoo.

The tradition of sending turkeys to live on a farm was established in the 1980s under President Ronald Reagan, and the stories became a source of satire and humor for reporters.

"Let me assure you, and this fine tom turkey, that he will not end up on anyone's dinner table, not this guy," President George H. W. Bush said in 1989.

"He's granted a presidential pardon as of right now -- and allow him to live out his days on a children's farm not far from here."

U.S. News // 1 hour ago
Brother of former NFL DB wanted after deadly shooting at youth football game
Aug. 15 (UPI) -- The brother of Aqib Talib, a former cornerback for the NFL's Denver Broncos, is wanted by police after a man was shot dead at a youth football game in Texas over the weekend.

U.S. News // 5 hours ago
Forecasters say Western states will sizzle this week amid excessive heat watches
Summer heat is set to build across the West as a gradual shift in the weather pattern occurs this week, with forecasters saying temperatures could climb almost 20 degrees above average in some areas over the coming days.

U.S. News // 21 hours ago
Rare nor'easter could bring lingering taste of fall
Tumbling temperatures this weekend could be here to stay. Canadian air, combined with a rare nor'easter could keep it feeling like September in the Northeast into next week.

U.S. News // 21 hours ago
Tropical rainfall to funnel into Texas, Mexico threatening flooding
Meteorologists warn that a tropical system will continue to bring flooding rainfall through southern Texas and northern Mexico in the coming days before impacting yet another portion of the United States midweek.