The Southern Center for Human Rights, which filed the federal lawsuit against the Worth County Sheriff's Department earlier this year on behalf of the students, said their "voices have been heard."

"Their rights were violated on April 14, and they took the steps to ensure that these illegal searches would not go unnoticed," said SCHR attorney Crystal Redd, according to the Daily Report.

On that date, Worth County Sheriff Jeff Hobby approved a drug sweep of the high school and deputies put the entire school of nearly 900 students on lockdown to conduct a school-wide, physical search without a warrant or probable cause. No drugs or paraphernalia was found.

"This settlement is a victory for the hundreds of Worth County students whose constitutional rights were violated," said Mark Begnaud, an attorney for one of the students.

Georgia Gov. Nathan Deal suspended Hobby this week after he was indicted on two charges of false imprisonment, one count of sexual battery and one charge of violating his oath of office.

Hobby has denied any criminal wrongdoing.

Each Worth County High School student will receive between $1,000 and $6,000, but students who attorneys say suffered more invasive violations will receive higher amounts.

Hobby's attorney, Raleigh Rollins, said the settlement will be paid through the county's insurance policy rather than directly from public funds.

U.S. News // 33 minutes ago
Facebook makes push to promote personalized ads to users, businesses
Feb. 25 (UPI) -- Facebook launched a new push Thursday to explain how its decision to use personalized ads is beneficial for millions of users.

U.S. News // 4 hours ago
House expected to pass Equality Act in move to expand LGBTQ protections
Feb. 25 (UPI) -- The House is expected Thursday to pass one of President Joe Biden's top legislative priorities -- a proposed law that would extend protections against discrimination based on sex, sexual orientation or gender identity. 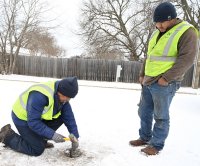 U.S. News // 6 hours ago
New COVID-19 deaths in U.S. rise to highest level in 2 weeks
Feb. 25 (UPI) -- New coronavirus cases in the United States remain on a downward trend, but the number of additional deaths is the highest in two weeks, according to data Thursday from Johns Hopkins University.