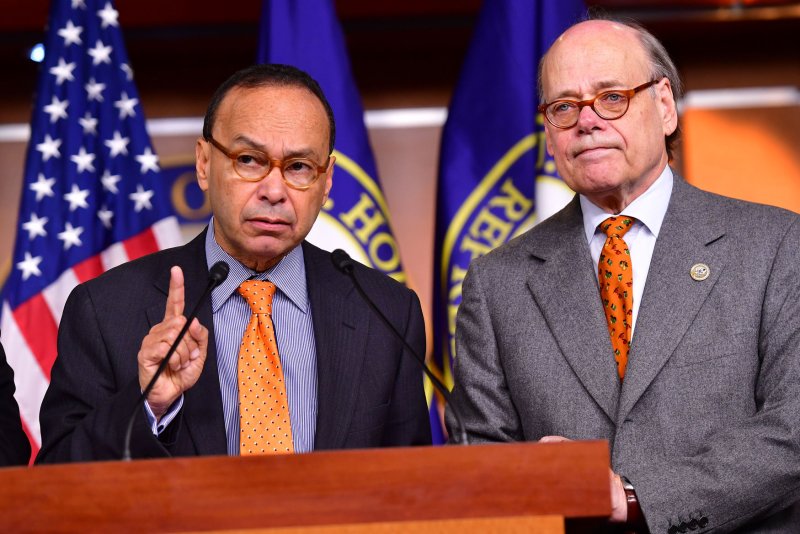 A copy of six Democrats' Articles of Impeachment against President Donald Trump was displayed at a news conference Wednesday on Capital Hill. Photo by Kevin Dietsch/UPI | License Photo

Nov. 15 (UPI) -- Six House Democrats on Wednesday announced they signed onto a resolution to introduce five articles of impeachment against President Donald Trump.

Rep. Steve Cohen of Tennessee sponsored the resolution, which was endorsed by Luis Gutierrez of Illinois, Al Green of Texas, Marcia Fudge of Ohio, John Yarmuth of Kentucky and Adriano Espaillat of New York.

Last month, Green introduced impeachment articles, which focused on accusations that Trump has encouraged racial and ethnic divisions throughout the United States.

Rep. Brad Sherman, D-Calif., has also launched an impeachment effort based on the firing of FBI Director James Comey.

The five articles of impeachment in Cohen's resolution include obstruction of justice to fire Comey, continuing to frequent and profit from his businesses, undermining the independence of the federal judiciary and undermining the freedom of the press.

"The time has come to make clear to the American people and to this president that his train of injuries to our Constitution must be brought to an end through impeachment," Cohen, the ranking member on the House judiciary committee's Constitution subcommittee, said in a release. "I believe there is evidence that he attempted to obstruct an investigation into Russia's interference with the U.S. presidential election and links between between Russia and the Trump campaign, most notably the firing of FBI Director James Comey.

"The president's blatant refusal to separate himself from his businesses has led to clear instances of conflict of interest that appear to violate both the domestic and foreign emoluments clauses," Cohen said. "And his attacks on 'so-called' judges and 'fake news' have undermined public confidence in the judiciary and the press. It's time for Congress to take action to stop this reckless and harmful behavior by removing Mr. Trump from office and to defend and uphold the Constitution of the United States."

"I don't expect the House Judiciary Committee, which is operated like a branch of the administration, to take up hearings," he said.

The Tennessee congressman said he spoke to Tom Steyer, who is spending $10 million in advertising calling for Trump's impeachment, and House Minority Leader Nancy Pelosi's office.

Pelosi, of California, and minority whip Steny Hoyer, of Maryland, have opposed impeachment.

"Do we disagree with the policies? We do. But disagreeing with the policies is not enough to overturn an election, a free and fair election," Hoyer told reporters in the Capitol shortly after Cohen's news conference.

"There are a large number of Democrats that believe this president ought to be impeached, we have just a made a judgment that the facts aren't there to pursue that," he said.

Michael Ahrens, a Republican National Committee spokesman, said in a statement: "House Democrats lack a positive message and are completely unwilling to work across the aisle, so instead they've decided to support a baseless radical effort that the vast majority of Americans disagree with."