Facebook said political advertisers must reveal who paid for ads and how much they spent on them. File Photo by Terry Schmitt/UPI | License Photo

Oct. 27 (UPI) -- Facebook on Friday said it is going to start requiring buyers of political advertisements to verify their identities and disclose who paid for the ads.

Facebook, along with other social media and tech companies, has come under scrutiny over the past year possibly for being a vehicle for Russian cyberinterference in American elections.

"When it comes to advertising on Facebook, people should be able to tell who the advertiser is and see the ads they're running, especially for political ads," a blog post by Facebook Vice President of Ads Rob Goldman said.

Going forward, Facebook users will be able to click on a "Paid for by" disclosure on a political ad to see who paid for it, the blog post said.

"For political advertisers that do not proactively disclose themselves, we are building machine learning tools that will help us find them and require them to verify their identity," Goldman added.

Users also will be able to see all political ads for four years, how much was spent on the ads, how many impressions the ads received and the demographic information for the audience reached by the ad.

Katherine Haenschen, assistant professor in Virginia Tech's Department of Communication, said she advocates a law requiring all tech companies to disclose who is buying ads and how much they're spending as well as who the ads are targeting.

She told UPI that such a law would bring "transparency to process that we don't currently have."

U.S. News // 44 minutes ago
'Joe Exotic' gets 1 year shaved from federal sentence
Jan. 28 (UPI) -- The Oklahoma zookeeper best known as Joe Exotic in the Netflix series "Tiger King" was re-sentenced to 21 years in prison in a murder-for-hire plot to knock off a rival. 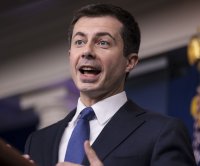