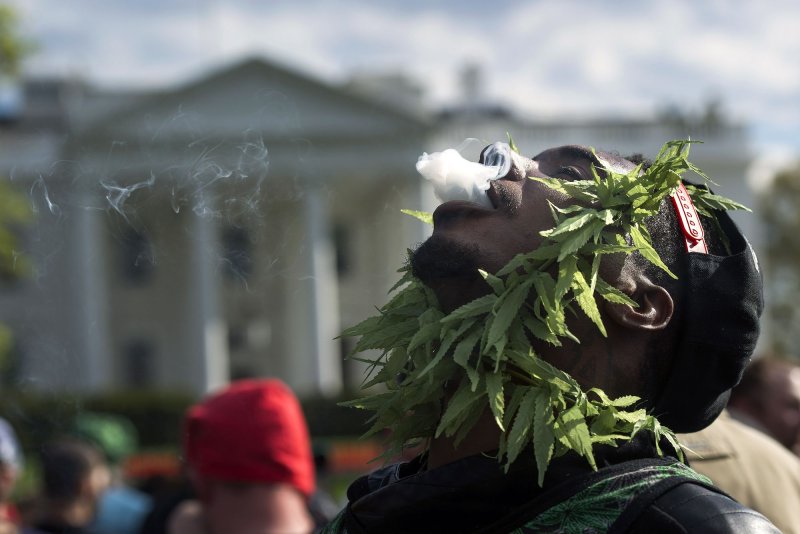 Oct. 25 (UPI) -- A record-high number of adults in the United States -- 64 percent -- say they support legalizing marijuana, according to new research.

According to the Gallup survey, Americans' support for legalizing pot has grown since they poll first asked the question in 1969, when just 12 percent supported the proposal.

Medical marijuana is legal in 29 states and Washington, D.C.

According to Gallup's survey, about 1-in-5 Americans live in a state where the drug has some legal status.

For the first time this year, a majority of Republicans said they support legalized marijuana -- 51 percent -- which is up 9 points from last year. A majority of Democrats supported it for the first time in 2009, a figure that rose to 72 percent this year. Sixty-seven percent of independent respondents said in this year's poll they back the proposal.

"Attorney General Jeff Sessions could find himself out of step with his own party if the current trends continue," Gallup's Justin McCarthy said of Wednesday's numbers. "Rank-and-file Republicans' views on the issue have evolved just as Democrats' and independents' have."

The new survey was conducted Oct. 5-11 among 1,028 adults. The margin of error is 4 percentage points.

U.S. News // 1 hour ago
Exceptional western U.S. heat wave to bring days of dangerously high temperatures
The magnitude of the heat expected across the western United States through the coming week will be one for the record books, according to forecasters.

U.S. News // 21 hours ago
Gallup poll: Gender identity a dividing issue in U.S.
June 11 (UPI) -- A new Gallup Poll has found that while very few Americans identify as transgender, most have an opinion on the issue.
Advertisement