Oct. 2 (UPI) -- Facebook on Monday handed over to congressional investigators 3,000 advertisements that appeared to have been bought by Russian sources before, during and after last year's U.S. presidential election.

In a statement, the social media giant said the ads, which ran from 2015 to early this year, "appear to amplify racial and social divisions."

Facebook said the ads came from a Russian entity known as the Internet Research Agency and violated the company's policies, because they came from inauthentic accounts.

"We are sharing these ads with Congress because we want to do our part to help investigators gain a deeper understanding of Russian interference in the US political system and explain those activities to the public," Joel Kaplan, vice president of Facebook's global policy, said.

"These actions run counter to Facebook's mission of building community and everything we stand for."

Also, Facebook said it will add 1,000 workers to its global ads review team and invest more in machine learning to better understand when to flag and take down ads.

Facebook said its efforts intend to make it more difficult in the future for divisive or counterfeit advertising to circulate, particularly during an election campaign.

"We care deeply about the integrity of elections around the world," Kaplan wrote. "We take responsibility for what happens on our platform and we will do everything we can keep our community safe from interference."

The House and Senate intelligence committees and the Department of Justice are continuing their investigations into potential Russian interference in November's election.

U.S. News // 8 hours ago
Fake heiress Anna Sorokin debuts prison drawings while in ICE custody
May 20 (UPI) -- Anna Sorokin, the convicted scammer who pretended to be an heiress named Anna Delvey, has unveiled a pop-up show of her prison drawings made while in the custody of U.S. Immigration and Customs Enforcement.

U.S. News // 11 hours ago
Captured fugitive Casey White ordered to give DNA sample
May 20 (UPI) -- An Alabama inmate who escaped custody with the help of a former corrections officer and was recaptured after a 11-day manhunt has been ordered to provide a DNA sample to prosecutors.

U.S. News // 13 hours ago
Damaging tornado tears through northern Michigan
Heavy damage has been reported in Gaylord, Mich., after a large and extremely dangerous tornado was spotted in the area. 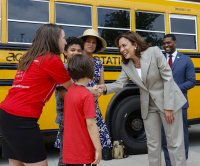