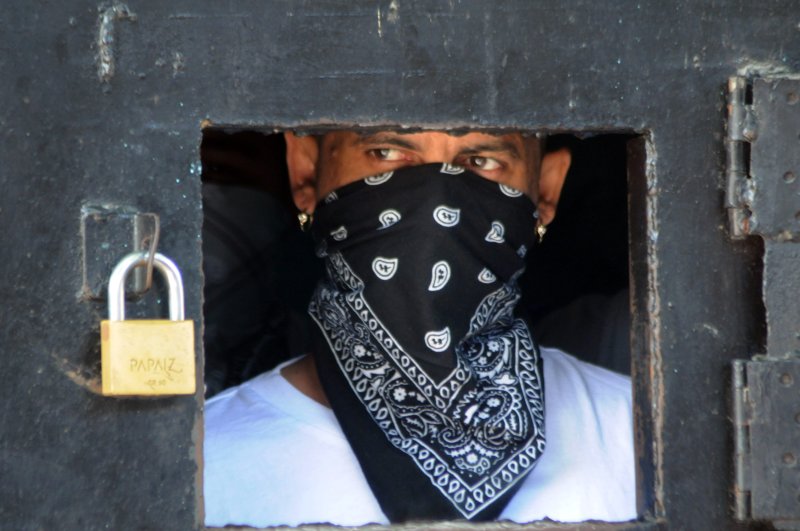 An unidentified member of the Mara Salvatrucha, or MS-13, gang remains in his cell block in Criminal Sampedrano prison in San Pedro Sula, Honduras, on May 28, 2013. More than 3,800 individuals, including 70 in the United States, were faced with criminal charges as part of a six-month international operation targeting the MS-13 and Barrio 18 gangs in the U.S., El Salvador, Guatemala and Honduras. File Photo by STR/EPA

The U.S. Department of Justice said that more than 70 individuals were charged in the U.S. in California, Maryland, Massachusetts, New York, Ohio and Virginia.

"Increasingly, transnational organized crime - and its attendant violence - touches U.S. communities, leaving devastation in its wake," Blanco said on Friday, according to the Miami Herald.

President Donald Trump promised to "destroy" MS-13 and other gangs like it during a speech in front of police officers in Long Island, N.Y. in July.

"Together we're going to restore safety to our streets and peace to our communities and we're going to destroy the vile, criminal cartel MS-13 and many other gangs," Trump said.

MS-13 formed in Los Angeles in the 1980s as an influx of Salvadoran immigrants fled civil war in Central America. Barrio 18 has a similar origin, with its roots based in Honduras.

Blanco said information was not readily available regarding whether the 70 suspected gang members detained in the U.S. were immigrants.

"We conducted simultaneous operations coordinated among all of our countries impacting the leadership structure of the gangs and with an emphasis on the gang cliques which are generating the most revenues and with the strongest transnational ties," Melendez Ruiz said.

The attorneys general and other officials said they hoped the operation would serve as a basis for future collaborative efforts against transnational organized crime.

"This has an end because we're working together," Blanco said. "These gang members in Central America are not going to have a place to hide. They can't hide here and they can't hide there either."

U.S. News // 23 minutes ago
Former Sen. Bob Dole to be honored, lie in state at U.S. Capitol Thursday
Dec. 9 (UPI) -- Bob Dole, former U.S. senator from Kansas and Republican presidential nominee who died early this week, will be memorialized and lie in state in the U.S. Capitol Rotunda on Thursday.

U.S. News // 21 hours ago
Biden visits Kansas City to underscore benefits of $1.2T infrastructure plan
Dec. 8 (UPI) -- President Joe Biden traveled to Kansas City on Wednesday in a trip to promote the new $1.2 trillion bipartisan infrastructure bill and explain how it's going to create thousands of jobs in places like the Midwest.

U.S. News // 16 hours ago
Abortion rights council calls on California to pay for out-of-state patients if Roe vs. Wade falls
Dec. 8 (UPI) -- A council made up of abortion rights and women's health advocates recommended Wednesday that California prepare to provide abortion access -- and funding -- to all Americans if the Supreme Court overturns Roe vs. Wade.