Sept. 29 (UPI) -- The Senate Budget Committee on Friday unveiled its 2017 budget resolution, which would allow Republicans to move ahead on tax reform without needing Democratic votes to pass.

The 89-page resolution permits adding $1.5 trillion to the federal debt over 10 years, though its Republicans authors said the federal budget would balance itself out through a combination of spending cuts and increased economic activity they say lower taxes will generate.

The resolution employs a parliamentary tactic known as reconciliation, which enables certain budget-related legislation to pass the Senate without being subject to the 60-vote filibuster threshold that other bills must meet.

Republicans hold a 52-48 advantage in the Senate, meaning the reconciliation process would enable them to draft reforms to the nation's tax code within their own caucus -- and without needing to haggle with Democrats.

Majority Leader Mitch McConnell, R-Ky., had hoped to use the reconciliation process to overhaul the nation's healthcare system, as well, but was unable to come up with an agreement within his own caucus on the issue.

McConnell said the stakes are high in reforming the tax code, another longtime Republican priority.

"This budget is especially important because it will allow us to get to work on our pro-growth, pro-family, pro-jobs tax reform plan," McConnell said.

Though the tax plan itself can be passed with just 51 votes, the full federal budget must still meet the 60-vote threshold to pass, meaning Democrats will have some leverage in the debate over spending priorities.

The budget resolution released Friday begins to show the broad contours of what that debate could look like in the Senate.

While the resolution maintains current levels for non-defense discretionary spending for one year, over the course of the next 10 years it would enact $5.1 trillion in domestic spending cuts. Unlike the initial Republican budget proposal in the House and a draft by the Trump administration, both of which call for a large increase in defense spending, the Senate budget resolution would keep defense spending flat over the coming decade.

"This budget resolution puts our nation on a path to balance by restraining federal spending, reducing tax burdens, and boosting economic growth. It is also the first important step in providing Congress with the tools it needs to enact tax reform that will grow America's economy and strengthen hardworking families and small businesses," said Senate Budget Committee Chairman Mike Enzi, R-Wy.

For their part, Democrats have signaled a willingness to discuss an infrastructure spending package, a priority shared by President Donald Trump who campaigned on a promise to fix aging transportation and energy infrastructure. On the other hand, Democrats have promised to filibuster any budget that includes spending on a Mexican border wall, another of Trump's signature campaign proposals.

Congress faces a deadline of Dec. 9 to pass a budget for the coming year, though at times in the past when negotiations have dragged on, the parties have agreed to short-term extensions in order to avert a government shutdown.

U.S. News // 2 hours ago
FAA orders inspections for 777 engines like one that failed over Denver
Feb. 24 (UPI) -- The Federal Aviation Administration has ordered mandatory inspections for fan blades on some Boeing 777s after an engine failed in mid-air on a flight to Hawaii last weekend. 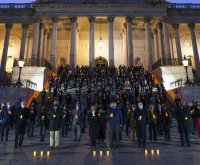 U.S. News // 16 hours ago
Congress holds candlelight vigil for American lives lost to COVID-19
Feb. 23 (UPI) -- Congress held a candlelight vigil and a moment of silence on Tuesday to honor the more than 500,000 Americans who have died of COVID-19. 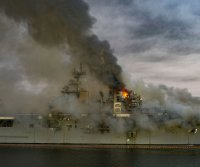