U.N. Ambassador Nikki Haley said that while it is important to pursue diplomatic options, she has no problem "kicking it to General Mattis."

UN Ambassador Nikki Haley addresses the issue of North Korea during a press conference in the Brady Briefing Room of the White House in Washington, DC on September 15, 2017. Photo by Pat Benic/UPI | License Photo

National Security Advisor General H.R. McMaster and UN Ambassador Nikki Haley address the press on the issue of North Korea during a press conference in the Brady Briefing Room of the White House in Washington, D.C., on September 15, 2017. Photo by Pat Benic/UPI | License Photo

Sept. 15 (UPI) -- U.N. Ambassador Nikki Haley told reporters on Friday that North Korea has been "strangled" by sanctions and that, while it is important to pursue diplomatic options, military options remain squarely on the table if sanctions are not effective.

Haley, briefing reporters at the White House with National Security Advisor H.R. McMaster, said tough sanctions and further diplomatic methods are necessarily and being pursued. She said, however, that options for dealing with the regime of Kim Jong Un are not limited to diplomacy.

"I have no problem with kicking it to General Mattis because I think he has plenty of options," Haley said.

McMaster said new sanctions on North Korea are just going into effect and need to be given a chance to work. He noted, however, that there is not an endless deadline for their success.

"We ought to make clear what's different about this approach is that we're out of time," McMaster said. "We've been kicking the can down the road and now we're out of road."

Hours later, President Donald Trump said the same thing during a speech at Joint Base Andrews, saying U.S. military options are "both overwhelming and effective," and called out North Korea's "utter contempt for its neighbors and the international community."

The United Nations reacted strongly after North Korea tested a weapon analysts say has the explosive power of 250 kilotons of TNT, passing the new sanctions on Sept. 11.

North Korea on Friday fired a missile which flew over Japan, but resulted in Japanese citizens being told to take cover.

U.S. News // 5 hours ago
Cybersecurity firm: Millions of voter, consumer records for sale on 'dark web'
Oct. 22 (UPI) -- Hackers are selling detailed information about tens of millions of American voters on the "dark web," underscoring vulnerabilities ahead of the Nov. 3 presidential election, according to a new cybersecurity analysis. 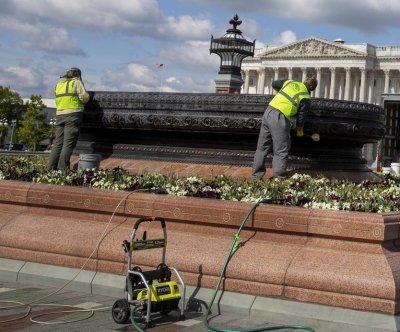 U.S. News // 6 hours ago
Gallup: Most U.S. voters say Trump doesn't deserve 2nd term
Oct. 22 (UPI) -- A majority of American voters say President Donald Trump does not deserve to be re-elected and almost 70% say most members of Congress don't, either, according to a Gallup poll Thursday.