Florida Gov. Scott: 'Get out quickly' ahead of Irma

By Ed Adamczyk and Danielle Haynes
1/10 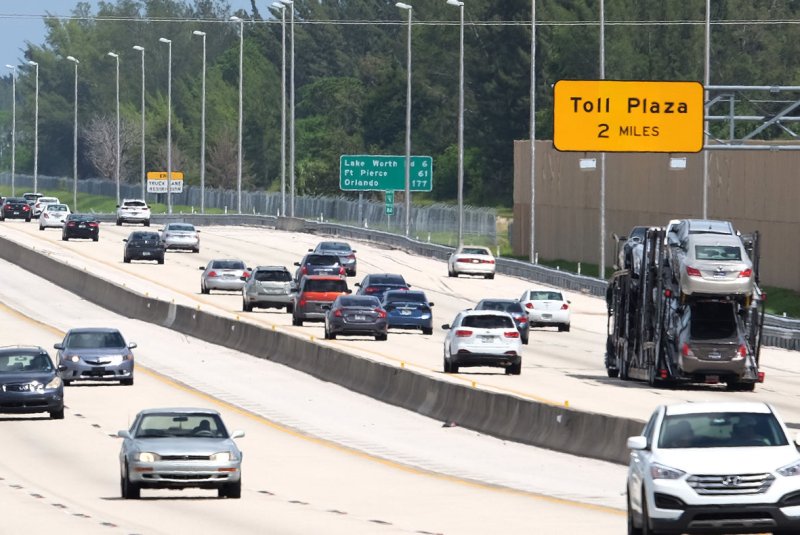 Vehicles move north on the Florida Turnpike from the Keys, Broward and Miami area as they pass through Boynton Beach, Fla., on Friday. Florida Gov. Rick Scott suspended all tolls on the turnpike to help keep congestion on the road to a minimum. Hurricane Irma was downgrade to a Category 4 storm as it shifts west across the state. Photo by Gary I Rothstein/UPI | License Photo

Sept. 8 (UPI) -- Florida Gov. Rick Scott on Friday urged thousands of residents in the state's evacuation zones to "get out quickly," particularly those in South Florida where a scheduled closure of Port Everglades will mean less fuel.

Speaking at a news conference midday in Tampa, Scott said that because of Hurricane Irma's "massive" size, "the majority of Florida will have major hurricane impacts, the entire east coast and entire west coast."

"We will quickly run out of good weather to evacuate," he said. "Leave, get out quickly. The roads will fill up quickly so you need to go."

The governor reminded Floridians of the devastation of the Category 5 Hurricane Andrew 25 years ago, saying "Irma is more devastating on its current path."

Scott said the state is still bringing in fuel and he urged gas stations to stay open as long as possible. Still, Port Everglades -- through which fuel shipments are arriving on the east coast -- will close later Friday, so fuel will stop being delivered in South Florida until after the storm.

On Thursday night, Scott ordered the mandatory evacuation of some communities south of Lake Okeechobee after meeting with representatives of the U.S. Army Corps of Engineers. They said the structural integrity of the Herbert Hoover Dike won't be compromised but "there will be additional impacts from excessive wind pushing water over the dike," Scott said.

Earlier in the week, portions of other coastal cities and counties were given mandatory evacuation orders. In Miami-Dade County, some 650,000 residents were told to leave their homes.

Residents fill out shelter paper work so that they can stay with their pets after Palm Beach County opened a animal shelter. Photo by Gary I Rothstein/UPI

Meanwhile, air travel out of Florida began shutting down Friday in anticipation of Hurricane Irma's arrival.

The latest meteorological models are in agreement that South Florida, notably Miami, will likely get a direct hit from the Category 4 hurricane this weekend. Irma is then forecast to travel northward through the center of the state, although its exact route may still change.

The major airports of Miami, Fort Lauderdale and Orlando - the 12th, 13th and 21st busiest airports in the United States, respectively, will close by Saturday.

The last outbound flight of American Airlines, which has a Miami hub, is scheduled for 4 p.m. on Friday. American will also shut down its Fort Lauderdale, Fort Myers and West Palm Beach facilities later in the day. Commercial flights will end at Key West Airport on Friday afternoon and at Orlando International Airport on Saturday.

Federal regulations forbid takeoffs or landings in sustained winds greater than 55 mph. Irma is expected to hit Florida with winds in the range of 140 mph.

Airports in Caribbean countries already struck by the hurricane were severely damaged on Wednesday and Thursday.

The airport closures come after additional flights were added to schedules so that airlines could help evacuate Florida residents and tourists. American was among the carriers adding flights to Dallas, Philadelphia and New York. Delta Air Lines added 2,000 seats Thursday to flights from Jamaica, the Dominican Republic and the Bahamas, along with Fort Lauderdale and Miami.

And because of American Airlines crew shortages in Miami, some passengers may be separated from the baggage until after Irma passes. The shortages have led to last-minuted canceled flights after passengers had already checked their baggage.

"There is such mayhem at that airport and there are thousands of bags to sift through, there are just not enough people to sift through all the bags for the stranded passengers," said American spokeswoman Alexis Aran Coello. "Obviously we want to get them to the bags, that's a priority, but our priority is also getting passengers out of Miami. So it's a tough situation."

The state's major highways -- the Florida Turnpike, Interstate 95 and Interstate 75 -- were jammed with northbound traffic on Thursday and Friday. I-75 was congested through Ocala and Gainsville, areas near Orlando. Scott said he had not ordered southbound lanes to be reversed to ease traffic because emergency vehicles still needed to be able to travel south.

Photo by Gary I Rothstein/UPI

Across the state and into Georgia and South Carolina, work weeks stopped as employers sent employees home. Scott urged business owners to "be compassionate" with their employees to allow them a chance to prepare and evacuate if necessary.

Officials in Florida emphasized that identification and legal status are not required at shelters, after reports that undocumented immigrants were reluctant to seek help after Hurricane Harvey in Texas over those concerns.

The University of Florida postponed a Saturday afternoon football game, citing the number of fans would clog the evacuation routes to attend the game.

U.S. News // 13 hours ago
Intense heat scorches much of the East Coast, with more still to come
A major spell of heat has arrived on the East Coast, bringing the season's highest temperatures for many and even setting daily records for some.