Aug. 16 (UPI) -- Cities across the United States are confronted with how they commemorate the legacy of Confederate history after a woman was killed last weekend in Charlottesville, Va., during protests surrounding the removal of a statue. Other Confederate monuments have since been targets of vandalism.

Mayor Catherine Pugh said, "They needed to come down. My concern is for the safety and security of our people. We moved as quickly as we could."

The Southern Poverty Law Center in 2016 said there were 718 Confederate monuments and statues in the United States, about 300 of which are in Georgia, Virginia and North Carolina.

On Monday, protesters in Durham, N.C., pulled down a Confederate monument outside the county courthouse.

In Tampa, Fla., the Hillsborough County Sheriff's Office said it was investigating an act of vandalism targeting the Confederate Memorial Park over the weekend. The park is on private property.

David McCallister, a leader in the Sons of Confederate Veterans group whose ancestors are memorialized in the park, helped clean up red paint that defaced the granite monuments. McCallister said the word "antifa" -- or "anti-fascist" -- was written on the property.

"It really made me heartsick to see red paint dripping like blood down on my ancestor's name on a monument meant to honor him as a Floridian and patriot," McCallister told the Tampa Bay Times.

In Gainesville, Fla., the "Old Joe" monument outside the Alachua County Administration building commemorating fallen Confederate soldiers was taken down Monday. The statue stood for 113 years and was moved to Oak Ridge Cemetery near Rochelle, southeast of Gainesville.

The University of Florida on Wednesday rejected a request by white nationalist leader Richard Spencer to rent space on its grounds to host an event on Sept. 12 -- citing possible violence.

"I find the racist rhetoric of Richard Spencer and white nationalism repugnant and counter to everything the university and this nation stands for," UF President Kent Fuchs said in a statement.

The decision was made after assessing the potential risks, particularly after calls for violence online, such as those who decreed "The Next Battlefield is in Florida," Fuchs added.

Fuchs said that while UF remains "unwaveringly dedicated to free speech and the spirit of public discourse," the First Amendment "does not require a public institution to risk imminent violence to students and others."

"The likelihood of violence and potential injury -- not the words or ideas -- has caused us to take this action," Fuchs said.

UF's denial of Spencer's speech comes after Texas A&M University canceled an event for Sept. 11 scheduled by white nationalist Preston Wiginton. The university cited "concerns about the safety of its students, faculty, staff and the public" following the Charlottesville incident in its decision.

In Washington, D.C., Congressional Black Caucus Chairman Cedric Richmond, D-La., has called for Confederate statues to be removed from the U.S. Capitol, where at least nine honoring former Confederate leaders and military officers stand as part of a collection.

"We will never solve America's race problem if we continue to honor traitors who fought against the United States in order to keep African Americans in chains. By the way, thank god, they lost," Richmond said.

RELATED What to do with Confederate statues? See what Russia did

In Georgia, a Stacey Abrams, a Democratic candidate for governor, has called for the removal of the carving depicting three Confederate leaders -- Jefferson Davis, Robert E. Lee and Stonewall Jackson -- on the state-owned Stone Mountain.

"We must never celebrate those who defended slavery and tried to destroy the Union," Abrams wrote on Twitter. "Confederate monuments belong in museums where we can study and reflect on that terrible history, not in places of honor across our state."

No changes are planned for the Gettysburg National Military Park, which memorializes Union and Confederate soldiers who fought in the 1863 Battle of Gettysburg.

Gettysburg National Military Park spokeswoman Katie Lawhon said the Gettysburg park has not yet received complaints or requests related to the Confederate monuments on site.

"These memorials, erected predominantly in the early and mid-20th century, are an important part of the cultural landscape," Lawhon told The Evening Sun.

The debate over how to commemorate the Confederacy's legacy boiled over after a protest Friday and Saturday in Charlottesville, Va., turned violent. A planned "Unite the Right" rally, which was organized to protest the removal of a Lee statue, drew hundreds of white supremacists, neo-Nazis and Ku Klux Klan members, as well as counter-protesters. The rally was canceled before it started due to violence.

Heather Heyer, a 32-year-old paralagel, was killed when a man plowed his car into a group of counter-protesters. James Alex Field, Jr., a 20-year-old man described as a Nazi sympathizer, was arrested.

President Donald Trump on Tuesday defended those who gathered to protest the statue's removal.

U.S. News // 36 minutes ago
Trump, Texas' Abbott set to speak at NRA convention after deadly school shooting
May 25 (UPI) -- Texas Gov. Greg Abbott, who announced that 19 children were killed in a shooting attack at their school on Tuesday, is scheduled to speak at the NRA's annual convention this week just a few hours away in Houston.

U.S. News // 3 hours ago
Police trying to piece together Texas school shooting as nation mourns 19 children, 2 educators
May 25 (UPI) -- Authorities in south-central Texas will give an update Wednesday on the elementary school attack that killed nearly 20 children and two educators and became the deadliest school shooting in the United States in a decade.

U.S. News // 5 hours ago
'We let you down': Execs testify in Congress to explain U.S. shortage of baby formula
May 25 (UPI) -- Officials from the Food and Drug Administration and U.S. manufacturers of baby formula will appear in Congress on Wednesday to testify about what's causing the ongoing formula shortage and what the answers might be.

U.S. News // 9 hours ago
Glencore agrees to pay $1.1B to settle bribery, price-fixing charges
May 25 (UPI) -- Glencore International has pleaded guilty to running a multinational bribery scheme and manipulating fuel oil prices in the United States and will pay some $1.1 billion in penalties.

U.S. News // 11 hours ago
U.S. sanctions Hamas official, facilitator network
May 24 (UPI) -- The United States blacklisted a Hamas finance official and an expansive network of facilitators and companies across the Middle East and North Africa that generate funds for the Palestinian militant organization. 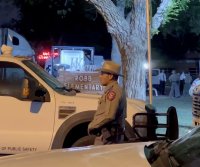