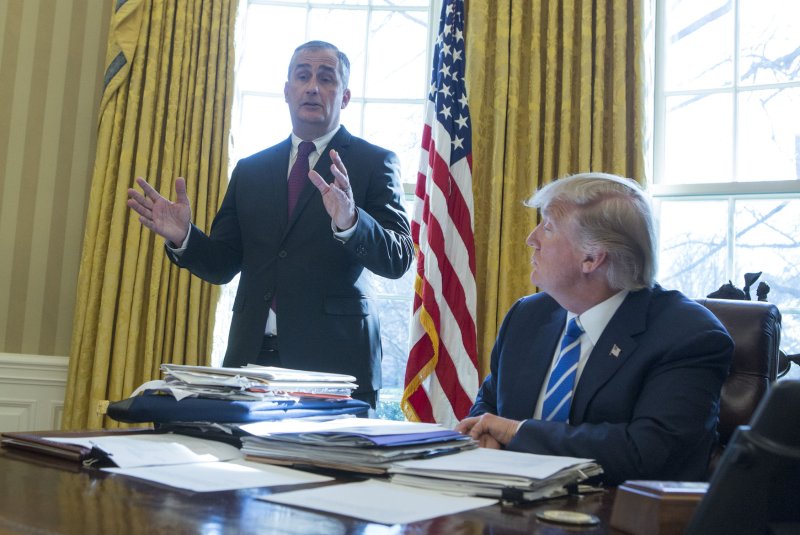 President Donald Trump meets with Intel CEO Brian Krzanich at the White House on February 8. Krzanich on Monday resigned from Trump's American Manufacturing Council -- one of four to do so this week. File Photo by Chris Kleponis/UPI/Pool | License Photo

"I'm resigning from the Manufacturing Jobs Initiative because it's the right thing for me to do," Paul wrote on Twitter.

Paul's resignation follows that of Intel CEO Brian Krzanich and Under Armour CEO Kevin Plank, who left the president's council over his response to the Charlottesville, Va., attack last weekend.

Krzanich said he resigned to "call attention to the serious harm our divided political climate is causing to critical issues."

The Intel executive said important issues, such as the decline of American manufacturing, have been "sidelined" by "politics and political agendas."

"I have already made clear my abhorrence at the recent hate-spawned violence in Charlottesville, and earlier today I called on all leaders to condemn the white supremacists and their ilk who marched and committed violence," Krzanich said in a statement. "I resigned because I want to make progress, while many in Washington seem more concerned with attacking anyone who disagrees with them. We should honor -- not attack -- those who have stood up for equality and other cherished American values. I hope this will change, and I remain willing to serve when it does."

Trump has been criticized for his response to the deadly Charlottesville incident.

Merck CEO Kenneth Frazier was the first to resign from the council -- suggesting Trump's response did not "clearly" reject "hatred, bigotry and group supremacy."

Plank said in a statement that he appreciated the opportunity to serve on the council but has also decided to step down.

"I love our country and our company and will continue to focus my efforts on inspiring every person that they can do anything through the power of sport, which promotes unity, diversity and inclusion," Plank said.

Trump's council, set up to advise the president on American manufacturing, is chaired by Dow Chemical Co. CEO Andrew Liveris.

In June, Tesla CEO Elon Musk resigned from this and another council after Trump said he would withdraw the United States from the landmark Paris climate change agreement.

U.S. News // 5 hours ago
Three killed, suspect ID'd in shooting near Austin shopping center
April 18 (UPI) -- Authorities in Austin, Texas, said three people were dead at the scene and a suspect remained at large in a shooting that police said stemmed from a "domestic situation" near The Arboretum shopping center.

U.S. News // 6 hours ago
Wintry weather to strike again in the Northeast
After a potent nor'easter threw the Northeast back into winter for a few days, residents are wondering when it'll feel like spring again. AccuWeather forecasters believe warmer weather is imminent, but will not last long