Aug. 14 (UPI) -- President Donald Trump's approval rating dropped to its lowest level in his presidency Monday, according to Gallup.

In a survey of 1,500 adults 18 and older, Trump is supported by 34 percent with 61 percent disapproving of him, also a low. He is backed by 77 percent of Republicans.

The survey was conducted over a three-day period that ended Sunday and has a margin of error of 3 percentage points.

On Saturday, Trump did not specifically call out white supremacists and neo-Nazis in a statement condemning violence in Charlottesville, Va., on Friday and Saturday.

On Monday, he denounced the white supremacists by name.

Also last week, Trump warned North Korea with "fire and fury" about not to make any more threats against the United States while taking a working vacation at one of his golf properties in New Jersey. U.S. intelligence analysis determined North Korea has made a nuclear warhead small enough to fit on a missile.

For the week ending Sunday, Trump's approval rating was 36 percent for the seven days.

RELATED Poll: Americans most confident in U.S. military of all institutions

Trump has averaged a 40 percent approval rating since taking office. It reached 46 percent on Jan. 23-25, shortly following his Jan. 20 inauguration.

Predecessor Barack Obama's lowest rating was 38 percent three times in August 2011, October 2011 and September 2014. His highest was 69 percent in January 2009 after being inaugurated.

In the latest CNN poll from Aug. 3-6, Trump's approval rating was 38 percent.

U.S. News // 4 hours ago
CDC predicts spring peak in COVID-19 cases before 'sharp' decline in July
May 5 (UPI) -- The Centers for Disease Control and Prevention projected Wednesday that COVID-19 cases and deaths will reach another peak in May and July before declining amid rising vaccination rates.

U.S. News // 5 hours ago
Federal judge rules CDC's national ban on COVID-19-related evictions illegal
May 5 (UPI) -- A federal judge ruled Wednesday that the Centers for Disease Control exceeded its authority in ordering a nationwide moratorium on evictions to help renters remain in their homes during the COVID-19 pandemic.

U.S. News // 6 hours ago
Peloton recalls treadmills, apologizes after fighting gov't safety alert
May 5 (UPI) -- The Consumer Product Safety Commission on Wednesday announced a voluntary recall of Peloton treadmills that has drawn an apology from the company's top executive.

U.S. News // 7 hours ago
4 dead after small plane crashes into south Mississippi home
May 5 (UPI) -- Authorities say four people were killed in southern Mississippi on Tuesday night when a small plane slammed into a home.

U.S. News // 8 hours ago
ADP-Moody's: U.S. added 742,000 private jobs in April
May 5 (UPI) -- The United States added more than 740,000 private payrolls during the month of April, ADP and Moody's Analytics said in their monthly assessment Wednesday. 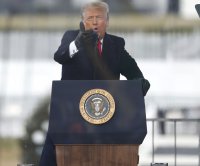