Attorney General Jeff Sessions on Monday said the car-ramming attack in Charlottesville, Va., on Saturday in which a protester opposing a white supremacy rally was killed was an act of domestic terrorism. File Photo by Pete Marovich/UPI | License Photo

James Alex Fields, Jr., is accused of plowing his Dodge Challenger into a crowd of people who were demonstrating against the white nationalist rallies on Saturday. After the initial strike, the car then reversed and hit additional pedestrians.

Heather Heyer, a 32-year-old paralegal, died after she was struck.

During an interview with ABC News Monday, Sessions said the attack can be defined as terrorism.

"It does meet the definition of domestic terrorism in our statute," Sessions said. "We are pursuing it in the [Department of Justice] in every way that we can make a case."

The automobile attack came shortly after authorities called off the planned white nationalist "Unite the Right" rally, which was set up to protest against the removal of Confederate monuments and memorials from public spaces.

Hundreds of white supremacists, neo-Nazis and Ku Klux Klan gathered in downtown Charlottesville as tensions escalated and counter-protesters rallied in attempts to shut down the "Unite the Right" rally.

Advertisement
RELATED Trump condemns hatred in Charlottesville 'on many sides'

Sessions' comments on Monday follow his announcement that the Justice Department would investigate the attack.

"You can be sure we will charge and advance the investigation towards the most serious charges that can be brought because this is unequivocally an unacceptable evil attack," Sessions said. "Terrorism investigators from the FBI are working on the case, as well as civil rights division FBI agents."

"Anytime that you commit an attack against people to incite fear, it is terrorism," he said, calling the attack "a criminal act against fellow Americans."

"A criminal act that may have been motivated -- and we'll see what's turned up in this investigation -- by this hatred and bigotry, which I mentioned we have to extinguish in our nation," he added.

President Donald Trump on Monday said he was returning to Washington, D.C., to begin work focusing on trade and the military. The White House said Trump would meet Sessions and the FBI to discuss Charlottesville Monday afternoon.

Trump has been criticized for his response to the deadly incident.

"America's leaders must honor our fundamental values by clearly rejecting expressions of hatred, bigotry and group supremacy, which run counter to the American ideal that all people are created equal," Frazier wrote. "As CEO of Merck and as a matter of personal conscience, I feel a responsibility to take a stand against intolerance and extremism." 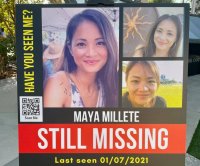