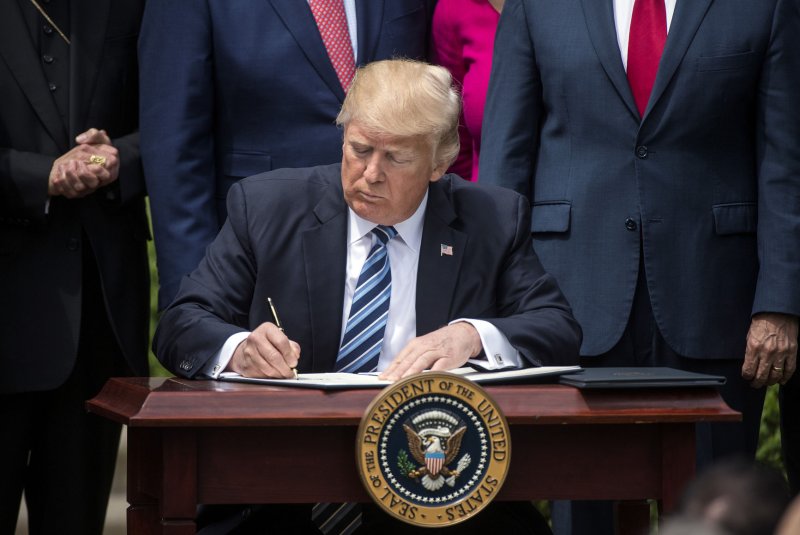 The signing statement indicates Trump expressed reservations about the bill's impact, saying it encroaches on presidential authority and may harm the United States' ability to work with allies on how to deal with Russia.

The statement also said Trump was concerned about the sanctions' possible unintentional harm on U.S. companies. The Trump administration said it would carry out the law in a way consistent with his constitutional authority.

The bill, which the U.S. House of Representatives and Senate passed by wide margins last week, toughens sanctions on the three nations -- specifically with Russia over its presence in Ukraine and Syria, as well as the U.S. intelligence community's assertion that Russia tried to influence the 2016 U.S. presidential election.

The bill -- now law -- also requires congressional review for any sanctions the White House might seek to lift.

The White House on Friday said Trump "approves the bill and intends to sign it." The bill's vote reached a veto-proof majority in Congress.

"It's impossible to endlessly tolerate this kind of insolence towards our country," Putin said after the House passed the bill. "This practice is unacceptable -- it destroys international relations and international law."

On Sunday, Putin said the United States must reduce its diplomatic personnel by 755 after U.S. Congress approved the sanctions.

In late July, the European Union said it was concerned with the United States' additional sanctions against Russia, citing a threat to energy independence.

The EU said implementation of the sanctions -- depending on circumstances -- could adversely affect infrastructure transporting energy resources to Europe, such as the maintenance and upgrade of pipelines in Russia that supply Ukraine's gas transit system.

Danielle Haynes and Sam Howard contributed to this report.

U.S. News // 13 minutes ago
Illinois Rep. Ramirez urges Biden, Democrats to stand up to MAGA extremism
Feb. 8 (UPI) -- House Rep. Delia Ramirez on Tuesday night urged President Joe Biden and their Democratic Party to stand up to Republican extremism while calling for more working-class people to join her in leading the country.

U.S. News // 5 hours ago
Ebay to lay off 4% of global workforce
Feb. 7 (UPI) -- Ebay is planning to lay off approximately 500 employees over the next 24 hours, the company confirmed Tuesday.

U.S. News // 6 hours ago
Inflation not likely to end soon, Fed chair Jerome Powell says
Feb. 7 (UPI) -- The slight easing of inflation is a welcomed sight for consumers but an end to the more than year-long battle against rising prices is far from over according to Federal Reserve Chair Jerome Powell.