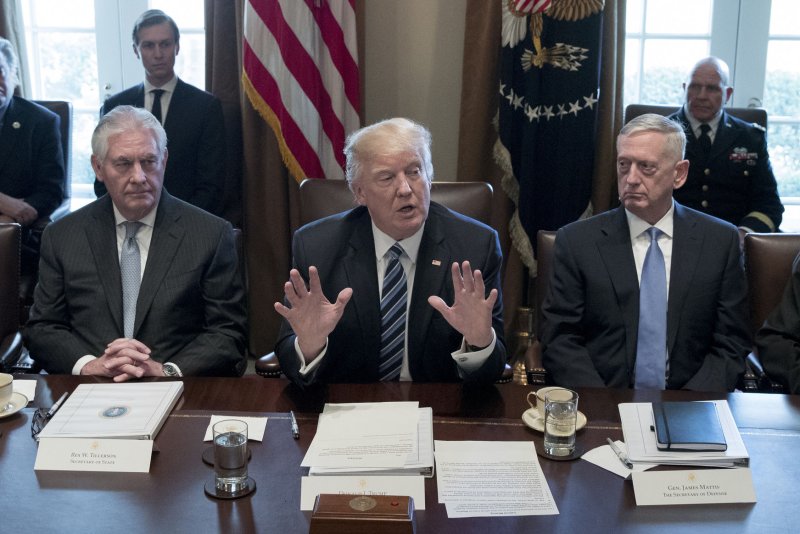 Secretary of State Rex Tillerson (L) and Secretary of Defense James Mattis (R) on Wednesday will meet with the Senate Foreign Relations Committee to discuss authorization for the war against the Islamic State. File Photo by Michael Reynolds/Pool/UPI | License Photo

Aug. 2 (UPI) -- Secretary of State Rex Tillerson and Secretary of Defense James Mattis on Wednesday will address the Senate Foreign Relations Committee to discuss authorization for the war against the Islamic State.

The closed-door hearing is scheduled to begin at 2 p.m. EDT at the Capitol.

The members of the Senate Foreign Relations Committee will meet Tillerson and Mattis "to receive a closed briefing on the authorizations for the use of military force, focusing on administration perspectives."

Committee Chairman Sen. Bob Corker, R-Tenn., will preside in the hearing in which the 2001 Authorization for Use of Military Force will be discussed.

Former President George W. Bush, former President Barack Obama and President Donald Trump have respectively used the 2001 AUMF on numerous occasions to order military action overseas -- including in operations in Afghanistan, Iraq, Somalia, Kenya, Yemen, Ethiopia and the Philippines, as well as in the war against the Islamic State.

In late June, the House Appropriations Committee voted to repeal the 2001 AUMF by passing an amendment but Republican House leadership in July rejected the effort.

U.S. News // 21 minutes ago
S&P 500, Nasdaq close with record highs as investors bet on online shopping
Nov. 27 (UPI) -- The S&P 500 and the Nasdaq Composite both closed with record highs Friday, wrapping a strong week for markets at the start of the holiday shopping season.