After Trump criticism, Sessions not planning to resign

July 20 (UPI) -- U.S. Attorney General Jeff Sessions dismissed suggestions Thursday that he may resign, following criticism from President Donald Trump -- and that he will keep working "as long as it is appropriate."

Sessions' comments follow critical remarks Trump made in an interview with The New York Times, in which the president said he would not have hired Sessions as attorney general if he'd known he would recuse himself from the Justice Department's Russia electoral investigation.

In March, Sessions removed himself from the Russia investigation following reports that he met with Russian ambassador Sergey I. Kislyak in 2016 while he was a U.S. senator and a Trump campaign adviser.

Under oath at his confirmation hearings in January, Sessions did not disclose the meetings -- and further testified that he "did not have communications with the Russians." When asked whether he had been in contact with anyone connected to Moscow's government, he answered, "No."

Trump also said Sessions "gave some bad answers" during his confirmation hearings about his communications with Russians.

News of Trump's remarks prompted some to call, or at least wonder if, the criticism might lead to Sessions leaving his post. Thursday, Sessions said he has no plans to quit.

"I have the honor of serving as attorney general. It's something that goes beyond any thought that I would have ever had for myself. We love this job. We love this department, and I plan to continue to do so as long as that is appropriate," Sessions said during a press conference.

"I voted for him and I haven't seen anything that he's done since then that would cause me to change my mind," he said. "Now, we have some policy differences like on sentencing reform and stuff like that and maybe a lot of other policy differences. But I think he's been appointed to be attorney general."

Sen. Rand Paul, R-Ky., said he agreed with Trump's belief that Sessions should not have recused himself.

"His attorney general should not have recused himself over reported incidental contacts with Russian officials," Paul wrote on Twitter.

U.S. News // 6 hours ago
Navy discharges 45 sailors over refusing COVID-19 vaccine
Jan. 27 (UPI) -- The U.S. Navy said it has discharged 45 service members who refused to be inoculated against the COVID-19 pandemic. 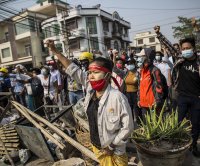 U.S. News // 8 hours ago
U.S. warns of heightened businesses risks in Myanmar
Jan. 26 (UPI) -- Ahead of the one-year anniversary of the military seizing control of Myanmar in a coup, the Biden administration is warning Americans about the heightened-risk of doing in business in Asian nation. 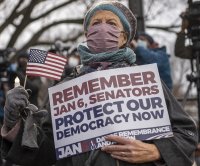 U.S. News // 12 hours ago
Bomb cyclone set to blitz Boston with blizzard conditions
A still-developing winter storm is set to become a major nor'easter that will bombard New England with heavy snow and blizzard conditions this weekend.
Advertisement