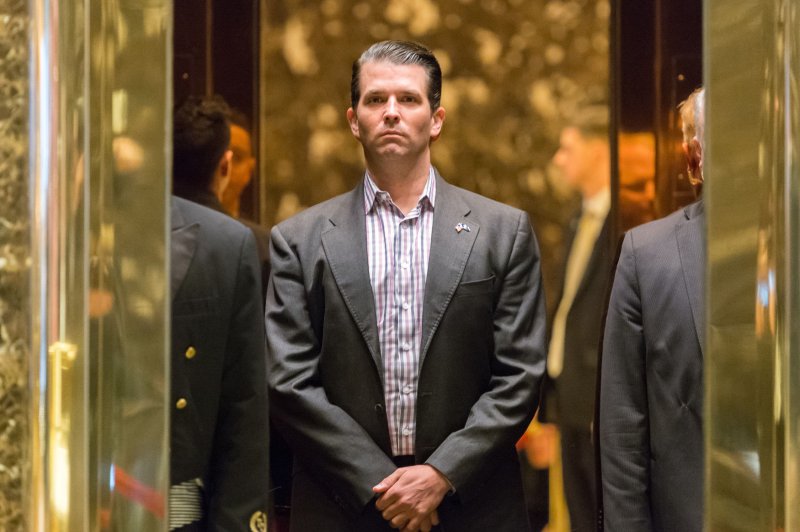 Donald Trump Jr. was told possibly damaging information about Hillary Clinton he was to receiving in a meeting with a Russian lawyer was part of a Russian government effort to help his father win the 2016 U.S. presidential election. File Photo by Albin Lohr-Jones/Pool | License Photo

July 11 (UPI) -- Donald Trump Jr. on Tuesday released an email chain indicating he agreed to meet someone he thought was a "Russian government attorney" who had documents that would "incriminate" Hillary Clinton.

The emails were exchanged between Donald Trump Jr. and Rob Goldstone, a publicist and former British tabloid reporter who helped arrange the meeting between the younger Trump and the Russian lawyer during the 2016 presidential campaign. Trump released the email chain in a series of posts on Twitter.

In an email to Donald Trump Jr., Goldstone wrote that the documents on Clinton "would incriminate Hillary and her dealings with Russia and would be very useful to your father."

"This is obviously very high level and sensitive information but is part of Russia and its government's support for Mr. [Donald] Trump," Goldstone wrote.

"If it's what you say I love it especially later in the summer," Donald Trump Jr. wrote.

Days later, after some other email communication, Goldstone proposed a meeting in New York with a "Russian government attorney."

It is not clear if Goldstone had direct knowledge of the origin of the damaging material related to Clinton but one source told the Times it appeared Goldstone was passing along information that had passed through others.

In an interview with the Times, Goldstone denied any knowledge of involvement by the Russian government in the meeting between Donald Trump Jr. and the lawyer. He said he was told the lawyer had information about illegal campaign contributions to the Democratic National Committee.

On Sunday, Donald Trump Jr. confirmed the meeting after Times reported on Saturday that he met with Kremlin-connected Russian lawyer Natalia Veselnitskaya, who he was promised had damaging information about Clinton, on June 9, 2016, in New York City's Trump Tower.

"In my view, this is much ado about nothing ... During this busy period, Robert Goldstone contacted Don Jr. in an email and suggested that people had information concerning alleged wrongdoing by Democratic Party front-runner, Hillary Clinton, in her dealings with Russia," Futerfas said in a statement. "Don Jr.'s takeaway from this communication was that someone had information potentially helpful to the campaign and it was coming from someone he knew. Don Jr. had no knowledge as to what specific information, if any, would be discussed.

"The bottom line is that Don Jr. did nothing wrong," Futerfas added.

In his statement on Sunday, Donald Trump Jr. said Veselnitskaya made "vague" and "ambiguous" statements that "made no sense" related to alleged information she had that individuals connected to Russia were funding the Democratic National Committee in support of Clinton.

Donald Trump Jr. then said Veselnitskaya's "true agenda" was to discuss the U.S. adoption of Russian children, which Moscow has banned, and the Magnitsky Act, a 2012 U.S. law that intends to punish Russian human rights abusers following the 2009 death of imprisoned Russian lawyer Sergei Magnitsky.

"My son is a high-quality person, and I applaud his transparency," Trump said, according to deputy White House press secretary Sarah Huckabee Sanders, who read the statement to reporters at Tuesday's off-camera press briefing.

Trump has made no public appearances since returning from the G20 Saturday.

The disclosure about Donald Trump Jr.'s meeting comes as former FBI Director Robert Mueller -- as a special counsel -- investigates allegations of collusion between Trump's campaign and Russia in an effort to defeat rival candidate Clinton.

"In light of NYT story the House must immediately pass Russia sanctions, passed Senate 98-2. No legit reason to stop it, but POTUS opposes," Democratic Hawaii Sen. Brian Schatz said in a statement. "It is more important than ever that the congressional committees and the special counsel have adequate resources and zero interference."

"This is beyond troubling. We need an independent investigation and we need it now," Democratic New York Rep. Joe Crowley said in a statement.

Russian President Vladimir Putin's spokesman, Dmitry Peskov, said the Kremlin was not aware of the meeting between Donald Trump Jr. and Veselnitskaya.

"We do not know who that is," Peskov said of Veselnitskaya.

Veselnitskaya on Tuesday told NBC News she did "not have Clinton info they wanted" -- alluding to the Trump team -- and denied being connected to the Kremlin.

EXCLUSIVE: Russian lawyer who met with Trump Jr. tells @KeirSimmons: "I did not have Clinton info they wanted" https://t.co/6r1SGlFy01 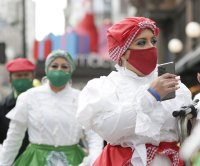